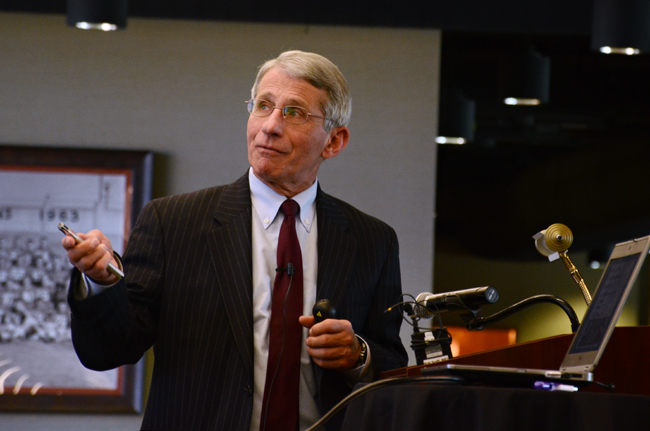 The 2014 Ebola outbreak should not be a reason to isolate infected regions, such as West Africa, according to Anthony Fauci, director of the National Institute for Allergy and Infectious Diseases, who spoke at the University on Monday.

“[The outbreak] is a wake-up call to eliminate disparities in health-care resources across the world,” Fauci said.

“There are more doctors in one building in Washington D.C., than in the entire region of West Africa,” Fauci said.

Ebola is spread through bodily fluids, such as vomit or blood. The history of regional conflict in West Africa and lack of trust between citizens and public officials contributed significantly to the outbreak, Fauci said.

“How do you control the Ebola outbreak when no one trusts anybody?” Fauci said.

People do not have to be alive to spread the Ebola virus, according to Fauci.

“Many of the Ebola infections were spread through burial procedures, since they involve a lot of touching and caressing from family members,” said Fauci.

Native B-cells, which are responsible for developing antibodies, are one of the body’s first lines of defense, according to engineering professor George Georgiou. In response to infectious diseases, such as Ebola, antibodies can adapt to match a specific strain of the virus, according to Georgiou.

“The miracle happens when the presence of infectious agents allows the antibodies to evolve,” Georgiou said.

“Infectious disease is the second leading cause of death around the world,” Whiteley said.

Fauci said better treatments are needed to deal with the Ebola virus.

“None of [the treatments] have been proven to work since the treatments are not occurring in a controlled environment,” said Fauci.

Ebola has potential to remain an infectious disease, according to Fauci.