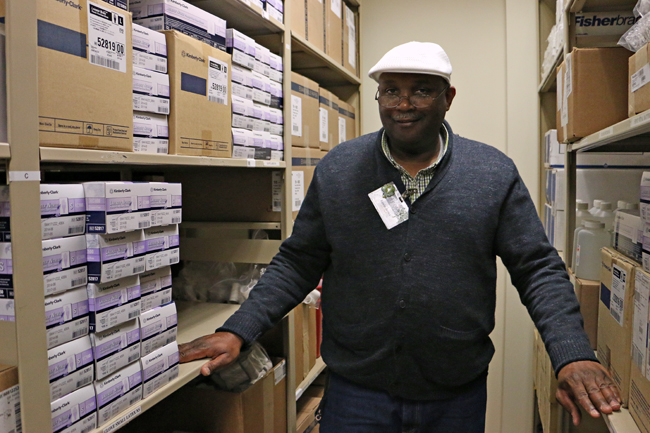 The R&B sounds of Barry White and Marvin Gaye echo from a desk in the medical supply room of the Student Services Building. Doctors file in and out to grab their lab coats. Vendors walk through to drop off new equipment. A Baltimore accent reverberates through the halls of the basement. Kevin Jones, a stores clerk at University Health Services, spends his days in the basement of the Student Services Building. Jones is responsible for organizing the medical equipment that keeps the place running.

Prior to working at UT, Jones attended college in Germany and joined the army. He handled medical supplies and repaired parts for vehicles and weapons. The army stationed him in Texas in 1985. He settled in Austin, got a job at UT and worked as a member of the reserves until retiring from military work in 2005. He’s lived in Austin ever since.

But Jones loves to travel. And when he can’t — whether he’s replacing batteries in equipment or marking expiration dates on medical products — Jones is always taking mental trips down memory lane.

On Mondays, he’s in Maryland, touring the nation’s capital, exploring the Smithsonian or fishing with his dad.

Then, on Wednesdays, he works his way down to Atlanta. He passes the day walking the streets where Dr. Martin Luther King Jr. grew up.

Thursdays come around, and he’s back in Texas, roaming around the Johnson Space Center in Houston.

By Fridays, he’s back in Austin, ready to be lazy “like a house cat on the floor.”

“That’s how I get through my work week,” Jones said. “I enjoy life because if you have eyes to see and ears to hear, you are blessed.”