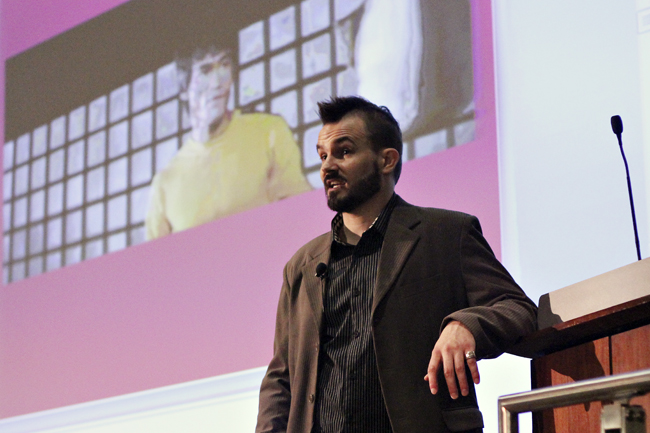 Quantitative analyst Jason Thalken has degrees in physics, mathematics and philosophy from UT, as well as a Ph.D. in physics from the University of Southern California — but he said his black belt in martial arts is what has really given his knowledge of physics greater depth.

Thalken gave a talk about the relationship between physics and martial arts Tuesday, as a part of UT Libraries’ Science Study Break lecture series. According to Thalken, his background in physics and 20 years of martial arts training makes his approach to fighting more accessible.

“There’s been a lot of attempts to put them together before, usually by grabbing an expert from either side, but it doesn’t work so well,” Thalken said. “[Sometimes experts] use science to kind of sensationalize claims made by the martial artists, not to make you understand how the science behind it could make you better in a situation where you’d need to fight.”

Thalken’s first book, “Fight Like a Physicist: The Incredible Science Behind Martial Arts,” is set for release in September and discusses the physics behind different fighting scenarios as well as approaches to protecting the brain from trauma.

“The book takes a look at headgear … does it protect us at all?” Thalken said. “It’s just preliminary, but it looks like rotation of the head is what causes the most problems, where force is applied to the axons in the brain when the head rotates. So, if that’s the culprit, how do we fix it?”

Showing the audience a behind-the-scenes clip of Jackie Chan getting injured while shooting a choreographed fight scene, Thalken said no matter how much he studies martial arts, it’s still impossible to prevent injury one hundred percent of the time.

“I like martial arts, and I like physics, so it’s interesting to see the combination of both,” Sebrero said.

Eduardo Tobias, a digital filmmaking and video production student at The Art Institute of Austin, came to Thalken’s program to learn more about the physics of fighting. Tobias said he is new to martial arts and is making a documentary about his transition from an MMA fan to a fighter.

“I’ve been studying MMA for two weeks now,” Tobias said. “Learning about the science behind fighting helps me understand what I’m doing in my classes — especially the concept of peace over power, like how to use the balance of your opponent to your advantage.”