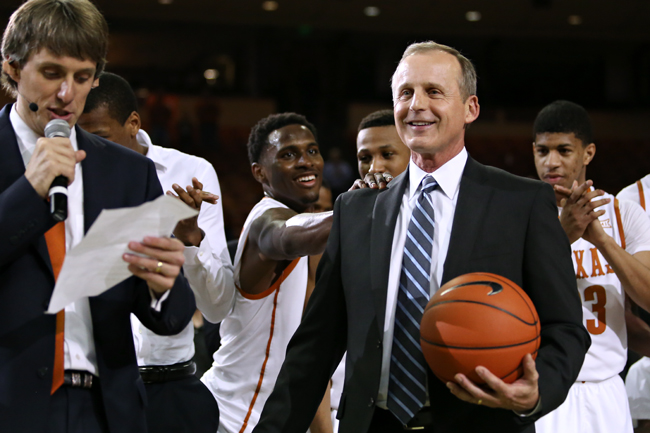 Fresh off Wednesday’s win — the 600th of Rick Barnes’ head coaching career — junior guard Javan Felix had a suggestion on how his coach should celebrate: “Dance.”

“I just want to turn some music on in the locker room, and we all get around him — everyone in the program — and just let him dance,” Felix said.

Although the players have never seen it, Barnes insists he can dance, but he’ll only do it on his own terms.

“I probably can dance better than Javan,” Barnes said.

The longtime Texas coach was in an especially good mood after the Longhorns’ 66–43 victory over TCU, as it propelled Barnes into an echelon few others occupy.

Barnes, who has spent the past 17 years as head coach of the Longhorns, improved to 398–174 in his career at Texas and 600–308 overall. He previously coached at George Mason, Providence and Clemson in his first 11 seasons before taking over at Texas in 1998.

“I’ve been fortunate and blessed,” Barnes said. “I became a head coach at a very young age. … I’ve never worked for anything but a great athletic director. I’ve had great support from players and coaching staffs.”

For Barnes, Wednesday’s win was much more important than the milestone since his team hadn’t won at home since Jan. 17. Before beating Kansas State, it had lost four straight to plummet down the Big 12 standings.

“Winning the game tonight was more important than [No. 600]”, Barnes said. “I still have faith and confidence in this group of guys. They deserve it.”

The Longhorns’ zone defense stifled the TCU offense all night long. The Horned Frogs struggled mightily to get anything going inside against Texas’ far superior frontcourt, forcing them to settle for low-percentage looks outside of the paint. TCU shot just 28.8 percent from the field and scored a paltry 16 points in the first half.

TCU didn’t have anyone to match up with junior center Cam Ridley, and Texas made a living off of feeding him the ball down low. He scored 15 points, his most in seven games, while racking up four blocks and a season-best 12 rebounds.

“The guards just looked for me throughout the game,” Ridley said. “I just tried to play as hard as I could on the glass, and obviously that worked well for me.”

The Longhorns didn’t just dominate down low, however. Felix led all scorers with 16 points after missing the last two games with a concussion. Yancy also enjoyed his most prolific game since the start of conference play, racking up 12 points and four rebounds.

After the game, however, Yancy was quick to switch the focus back to Barnes.

“He expects excellence out of everybody,” Yancy said. “He teaches us how to be self-disciplined and to be thankful for being at this University. He reminds us that we’re blessed to be here, and we shouldn’t take it for granted. … Just getting a relationship and getting to play for Rick Barnes — it’s an honor to play for him.”

With the win, the Longhorns improved to 16–8 on the season and 5–6 in conference play. They face another very beatable opponent at home Saturday in Texas Tech (12–13, 2–10 Big 12), before beginning a stretch of five consecutive games against ranked opponents.

If they can pile up some more wins during that rigorous stretch, Barnes and his players will have even more reason to dance.