Player notes and numbers from Longhorns’ win against TCU 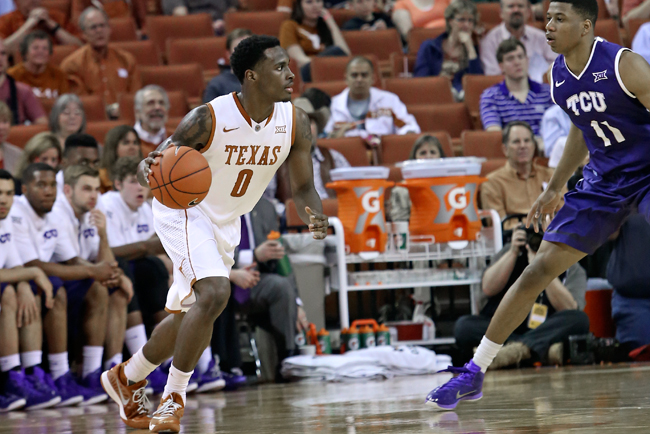 Yancy set the tone for Texas’ victory Wednesday night. After a slow start, Yancy woke Texas up with two deep balls. He ended the game with 12 points and four rebounds.

With senior forward Jonathan Holmes sidelined because of a concussion, head coach Rick Barnes needed someone to step up, and Yancy, starting in his place, did just that. He even got to wear the warrior’s belt, which looks like a boxing title belt with the inscription, “Do your job.”

Ridley got back to being a dominant force in the paint after struggling against Kansas State. The biggest body in the paint ended up with a double-double, posting 15 points and 12 rebounds to go along with four blocks. Most importantly, he got to the free-throw line often throughout the night. Unfortunately, he hit just 7-of-13 from the charity stripe.

Near the end of the first half, Ridley even attempted to bring the rim down with him after getting fouled on a dunk, not letting go until the last possible second. The backboard started to tilt, sending the fans into a frenzy and Ridley scurrying for cover.

“I was scared,” Ridley said. “I thought it was going to fall on me. I tried to put it down hard.”

While he did a good job defending the rim in his nine minutes, Ibeh just didn’t quite follow up on his spectacular game against Kansas State on Saturday. Against the Wildcats, Ibeh put up 4 points, four blocks and four rebounds on his way to becoming an unsung hero. But he tallied no points, no rebounds and just one block Wednesday night.

50: Myles Turner’s free-throw percentage in the last four games. Going into the Baylor game less than two weeks ago, Turner was shooting an outstanding 89 percent from the line — especially significant considering he’s a 6-foot-11 freshman. But, in the four games since, he’s gone 5-of-10 from the line. It’s no longer automatic for him.

31: Free-throw attempts for Texas. Time after time, Barnes has gotten frustrated with his team’s inability to get to the line. However, they didn’t make the most of their opportunity, hitting only 21-of-31.

4: Number of 3-pointers junior guard Javan Felix hit in his first game back after missing two straight with a concussion. He got off to a slow start, missing his first two, but hit four of his final five. He also sunk his only attempt from inside the arc — a baseline jumper off an out-of-bounds play.

4: Offensive rebounds for Texas. That’s the lowest of the year for Texas. Despite outrebounding TCU, 36–27, the Longhorns weren’t getting many second-chance looks. Considering they shot 51 percent — not astronomically good — there were plenty of opportunities for more.