Protesters show support for Texas Dream Act at the Capitol 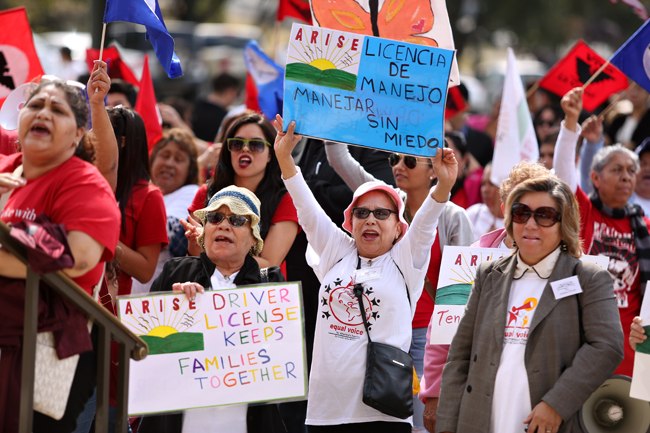 Hundreds of rally attendees chanted, “Sí, se puede,” or “Yes, we can,” at the Capitol on Wednesday to support a pro-immigration legislative agenda.

Legislators, including Sen. Sylvia Garcia (D-Houston), spoke at the rally to oppose legislation that would repeal the Texas Dream Act and to advocate for higher education rights for undocumented students.

“We’ve got a lot of strong leaders with very strong and loud voices that will be here to defend and protect the Dream act,” Garcia said. “We are working on things that really matter to our community. This is not one moment today; it’s a movement.”

Ivonne Saldana, president of UT’s League of United Latin American Citizens chapter and government junior, said it is important for Latinos, especially students, to be engaged in spreading “cultural competency” and expressing their political opinions.

“Many Latinos feel disconnected from the legislature and do not realize that it is their right as constituents to voice their concerns to members of Congress. Many families often lack the resources and information needed to be politically engaged,” Saldana said in an email. “Latino students give voice to different aspects of the community by being engaged and taking the information to their families and voicing the concerns of the community.”

Denise Gilman, clinical law professor and co-director of the UT Immigration Clinic, said she thinks repealing the act would negatively impact students and the University.

“We have seen numerous undocumented students here at UT contribute in really meaningful ways, in all aspects of University life, whether it be promoting vibrant conversations on immigration or whether it just be excelling in their particular programs,” Gilman said.

“The practice of singling out a group of people and rewarding them for not being in the country legally is hurting those who follow the law and wouldn’t otherwise qualify for in-state tuition due to length of residency,” Millsaps said.

“Chancellor McRaven not only feels it’s the morally right thing to do, but also that it ultimately benefits the economy of Texas to increase these students’ odds of earning a college degree by charging them in-state tuition rates,” UT System spokeswoman Jenny LaCoste-Caputo said in an email.

“As of now, it’s hard for me to pay for my college education, and if I was considered an international student, it would be impossible,” Paredes said.

According to Saldana, the increase in tuition would cause undocumented students to drop out, increase their loan debt or not consider higher education as an option.

“Young people are the future of this country and everyone deserves the right to be educated at the best institutions the U.S. has to offer, and that won’t happen in Texas if instate tuition is taken away,” Saldana said in an email.