UT Board of Regents met Wednesday to allocate budget 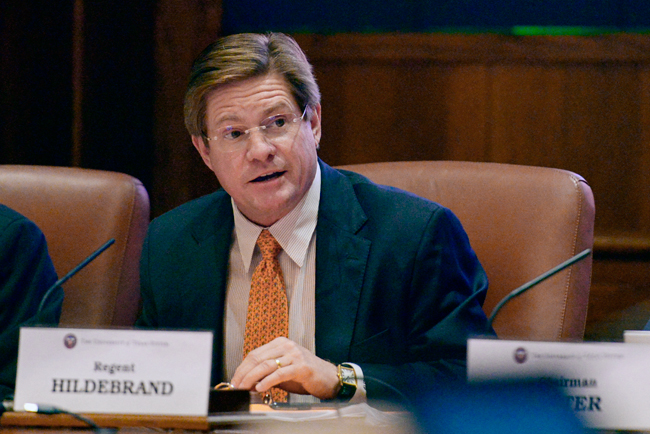 The UT System Board of Regents met Wednesday to discuss budget allocations within the UT System.

The regents divided their time among different committees to deliberate items on the agenda, including renovations to Moore-Hill Dormitory and funding for the UT System supercomputer.

Regent Wm. Eugene Powell argued against the allocation of the $6 million for the renovation.

“It just seems like such a prime location to go back … and spend this money when you might be able to do something by taking that building down and doing something new,” Powell said.

President William Powers Jr. defended the renovation and said larger construction in the area would force change upon the entire section of campus.

“I couldn’t see, for example, a higher rise building on that road without doing something very different with that whole area,” Powers said.

Regent Jeffery Hildebrand said the cost associated with the project seemed high for a small-scale renovation.

“We’re now increasing the original [authorization for expenditures], so to speak, from $8 million to $14 million,” Hildebrand said. “I mean it’s almost an 80 percent increase in the cost, and I calculate it’s 21 bathrooms and 10 ADA compliant student rooms. It seems like a big percentage increase for that minimal amount of work.”

The Finance and Planning Committee approved another $3 million in funding for a refresh of Lonestar 4, the UT System supercomputer system. The funds will be used to update components of the supercomputer that have aged and are in need of replacement.

In 2010, the Board of Regents approved $3 million to go toward the initial construction of Lonestar 4.

In the Finance and Planning Committee meeting, the regents also discussed the changing nature of the University Lands (UL), the 2.1 million acres of land the Texas Constitution gave to the UT and Texas A&M Systems. The System hired the first CEO for UL, Mark Houser, on Tuesday.

“I think he really does provide an opportunity to take us to the new level and to look at this differently,” Kelley said.

Hildebrand said the restructuring of leadership in charge of UL represents a distinct change.

“I think that this is hopefully a benchmark that we can start doing other things within this system and that is a free market’s look within a governance structure,” Hildebrand said. “I couldn’t be more excited about it.”

The Board of Regents will meet in open session Thursday to approve or deny the items approved by the committees.