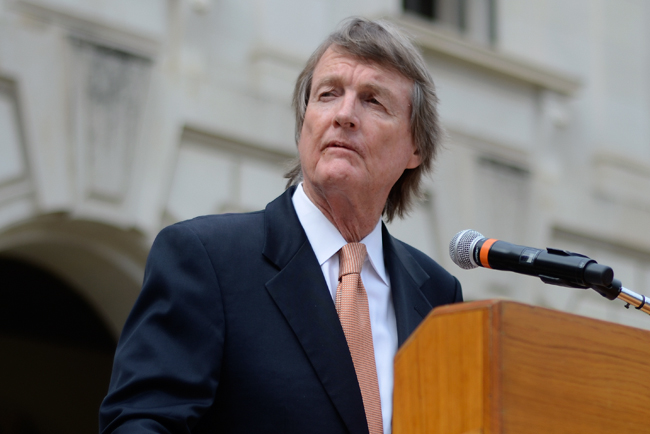 President William Powers Jr. helped secure admittance for a small pool of applicants over objections of admissions office officials, according to a report released Thursday by the UT System Board of Regents.

An investigation, performed by Kroll Associates Inc., also found administrators at the University and in the UT System hold “wildly divergent” attitudes regarding whether it is appropriate for a public university to consider relationships with high-ranking officials as part of the holistic review process.

The report concluded that Powers pressured undergraduate admissions officials to admit a “select handful” of applicants each year. There is no law, Regents rule or System policy that regulates how much weight the University can give external recommendations, such as letters and phone calls, in the admissions process.

“There are instances in which applicants do not succeed in the standard admissions process and the President’s Office will request, and in some cases direct, that certain files be reviewed again,” the report said. “Efforts were also made to minimize paper trails and written lists during this end-of-cycle [admission] process.”

Powers referenced similar practices at other universities to justify his actions.

“In every case, I acted in what, I believe, was the best long-term interest of the University,” Powers said. “In every select university across the country, similar processes take place.”

UT System Chancellor William McRaven said because the investigation found no broken laws or rules, he intends only to make changes for future admission activities.

“There are a lot of thing we could do better, but, at the end of the day, no willful misconduct [occurred], and I found no criminal activity, and, therefore, I intend to take no disciplinary action,” McRaven said.

The UT System commissioned Kroll to conduct an external investigation of the admissions process after Board of Regents member Wallace Hall alleged that UT administrators were admitting under-qualified applicants with connections to prominent legislators. The report found that many children of UT System officials were likely given special treatment as well.

In an email to Board of Regents members, McRaven said Powers’ lack of transparency concerned him.

Larry Sager, former dean of the UT School of Law, said Brazzil, Powers’ chief of staff, called Sager about students who had applied to the law school as many as 20 times per year.

“Sager acknowledged that the intensity of Brazzil’s interest in a candidate ‘may have on occasion swayed [his] decision,’” the report said.

The report found no evidence of a structured process for special treatment of recommended applicants.

“Sending recommendation letters directly to the UT President has been a widespread and longstanding practice by a host of distinguished individuals, [and thus] any problems with this practice would seem to be much more a matter of culture than individual misconduct,” the report said.

Powers acknowledged the wide-spread acceptance of the admission intervention culture.

“I inherited this process, which was well-known by regents, former chancellors, the Board of Regents office and UT System officials — many of whom, as the report notes, asked me to intervene on their behalf,” Powers said.