Nine songs to avoid during your Valentine’s Day serenade 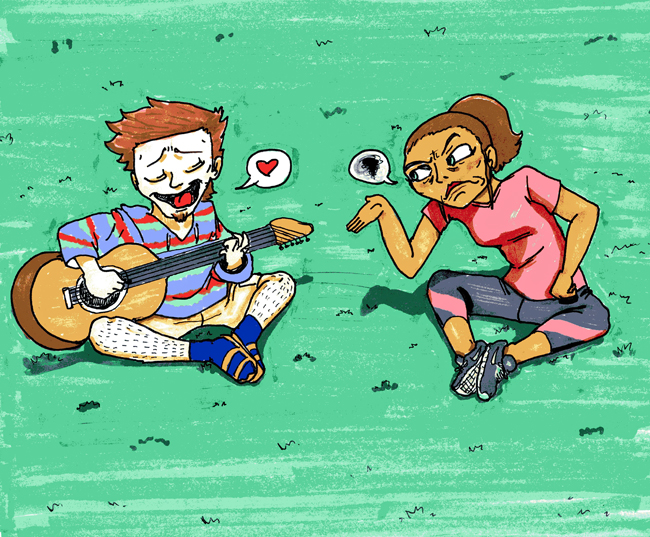 As every store, advertisement and radio song is reminding you, Valentine’s Day is upon us — but if you haven’t found the perfect gift, don’t fret. There’s a painless and cost-effective solution: master the art of serenade.  Singing a song to your significant other is the perfect addition to any Valentine’s gift package, but song selection is key; you don’t want anything too cliché or not cliché enough. As you narrow down your musical selection, we’ll make the process a little easier for you — here are a few songs you should definitely take off the list.

With a dark string arrangement and agonizing lyrics, this song makes the list because of its depressing feel. In general, R.E.M. songs work poorly as aphrodisiacs. Is R.E.M. a great band with musical genius? Yes. Are they romantic? Not at all.

Speaking of depressing, here’s another band that won’t help the mood, unless, of course, you’re the kind to get off on sadness. Radiohead’s first big hit tells the story of an inebriated man with low self-confidence attempting to get the attention of a woman — not exactly the message you want to send on Valentine’s Day.

This song makes the list because of its obscene lyrics. The narrator commands his lover to, “Fill [his] soul with vomit,” calls her a “parasitic, psycho, filthy creature,” and says some other things I can’t write in a newspaper.

“Every Breath You Take” –The Police

Written by Sting himself, this tune tells the story of a crazed stalker. The extremely simple lyrics and catchy tune sound deceptively optimistic, but, upon a second listen, it’s obvious that this song is anything but cheerful.

“We Are Never Ever Getting Back Together” – Taylor Swift

Taylor Swift’s music is riddled with aggressive breakup songs, but few are quite as straight-forward as this one. I guess if you wanted to declare your breakup Saturday, this would be a good choice. Otherwise, I’d stay away.

“Why Don’t We Get Drunk and Screw?” – Jimmy Buffet

The title says it all. Although it was written as a country parody song, your significant other might not see the humor in this one. With lyrics such as, “I just bought a water bed; it’s filled up for me an’ you,” your partner probably wouldn’t be impressed.

“Crash Into Me” – Dave Matthews Band

This acoustic tune may be simple to play on guitar, but the lyrics are the darkest of this list. The string arrangement enforces the aura of sadness, resulting in one of the most  depressing songs in the Beatles’ catalogue.

“My Heart Will Go On” – Céline Dion

Although this song is meant to be romantic, its massive popularity and overly-dramatic lyrics have propelled this Titanic tune into a realm no song wants to go: Everyone knows it, but no one wants to hear it.

Not persuaded yet? Listen to the playlist for yourself, then send us your least-romantic song suggestions here.

(Not included: Taylor Swift and the Beatles. The former had a nasty break-up with Spotify itself and the relationship between Spotify and The Beatles is a classic example of "it's complicated.")