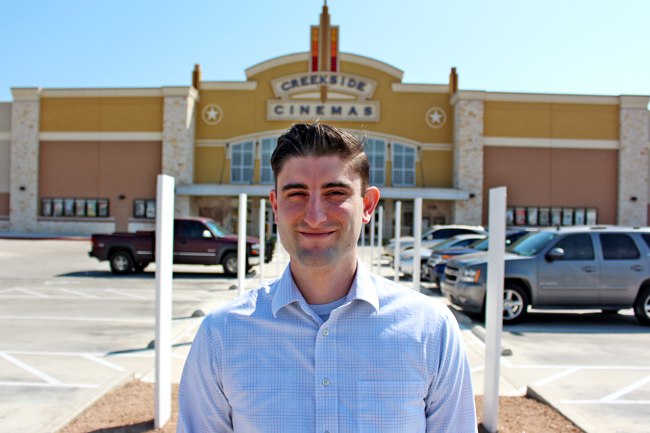 In common mythology, vampires are said to live forever — and eternity is how long Ryan Mitts thought he might have to wait to see his vampire workplace comedy on the big screen.

Mitts, a radio-television-film alumnus, started working on the script for his first movie after completing the UTLA program in 2007. The horror comedy, “Bloodsucking Bastards,” takes place in a “soul-sucking” office where the main characters discover their boss is a vampire.

Mitts wrote the bulk of the script when he was just 22 years old, and a few months after he finished, a production company made an offer — which quickly fell through. Just over seven years later, the film premiered as the opening film of independent film festival Slamdance last month.

“It was a whirlwind,” Mitts said. “I wrote the first draft of the script from September to October, and, within three or four months, I had it optioned to a company. I really thought I would have that movie made that fast, and then, obviously, it kind of crumbled apart.”

Eventually, “Bloodsucking Bastards” was picked up by Fortress Features. Patrick Rizzotti, the film’s producer, said that without a tip from a company intern, the script would have never made it into his hands.

“I can’t remember a time that a script that we made [into a movie] came in cold from someone we didn’t know,” Rizzotti said. “We read it and loved it. That just doesn’t happen very often.”

Rizzotti said Mitts’ combination of horror and comedy made the film stand out. Mitts has been writing comedy for years, but writing about vampires meant covering new ground. When he first wrote the script, vampires did not have the domineering Hollywood presence they enjoy today.

“People really liked the idea of a soul-sucking environment,” Mitts said. “It seemed kind of obvious, but he said the characters and their relationships were so genuine that it worked.”

Mitts originally planned on majoring in economics, but he said his career took a turn his first year at UT.

“I ended up taking creative writing my first semester, and I just fell in love with it,” Mitts said. “I started to wonder what I could do with that, and so I was thinking about film, and I just knew it was something I wanted to do.”

During his time in the class, Mitts focused on developing pieces with comedic elements. As his career progressed, Mitts came to focus on writing more and more. Mitts said he draws inspiration from “Workaholics,” “The Simpsons” and other shows that do genre homages.

“I knew I wanted to write comedy because it was what I would always write,” Mitts said. “I also really loved the idea of genre blending. I wanted to incorporate the atmosphere of a horror movie but still do it as a comedy.”

“It was a really big learning experience,” Mitts said. “A lot of promises are made, and, if you’re like me, and you’re pretty trusting, you can get burned. But I think that feeling — of instant success that didn’t turn out — really gave me the passion and the belief that it could happen if I stuck with it.”