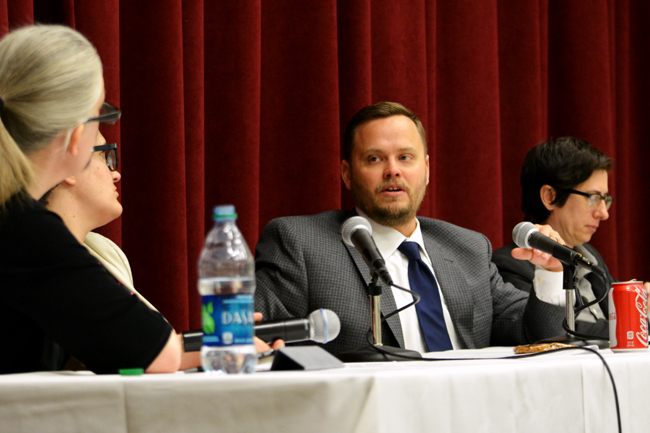 During a panel discussion at the School of Law on Friday, civil rights lawyers warned of backlash if Texas’ constitutional ban on same-sex marriage is lifted.

Lawyers discussed the ways that the state legislature could still use loopholes in anti-discrimination laws and new laws to hurt the LGBT community in areas such as housing, employment and adoption.

“If you were to poll people and ask if they thought LGBT Texans have protection against employment discrimination, you would find most people think they already exist because they are so fundamental to being a full participant in our society,” said Rebecca Robertson, legal and policy director of the ACLU of Texas. “In reality, we do not have any protections for LGBT Texans in our state.”

Ian Pittman, a partner at the family-law and estate-planning law firm Jorgeson Pittman LLP, said state government could also use the “power of the purse” to control state employees to prevent them from following Supreme Court precedents.

Robertson said an example of this practice is Rep. Cecil Bell’s (R-Magnolia) bill, HB 623, which entered the Texas Legislature on Jan. 8. The bill says any employee of the state who acts against Texas’ ban will be deprived of salary and any other employment benefits.

Panelists and members of the audience said there were several opportunities for lawyers and law students to help expedite the LGBT movement in Texas.

“In our current session, there are three LGBT lobbying days scheduled, and I cannot overemphasize the importance to have attorneys and law students appear before the legislature and talk about these issues,” said Gary Schumann, founding partner of Savrick, Schumann, Johnson, McGarr, Kaminski & Shirley LLP.

Robertson said she thinks the backlash will create additional movement towards equality.

“When we hear about people who returned happy from their honeymoon, came to work the next morning, shared their story with their boss and got fired without recourse, it may create some momentum for an employment nondiscrimination act on the state level and federal level that would finally extend those protections,” Robertson said.

Rudy Corona, computer science junior and vice president of the Secular Student Alliance, said the next step for the LGBT community is transgender rights. He said members of the transgender community face a litany of problems that might be beyond the attention of the public.

“[Even] public bathrooms can be an uncomfortable place for transgender people because they might not be welcome to the bathroom of their choice based on their gender,” Corona said.