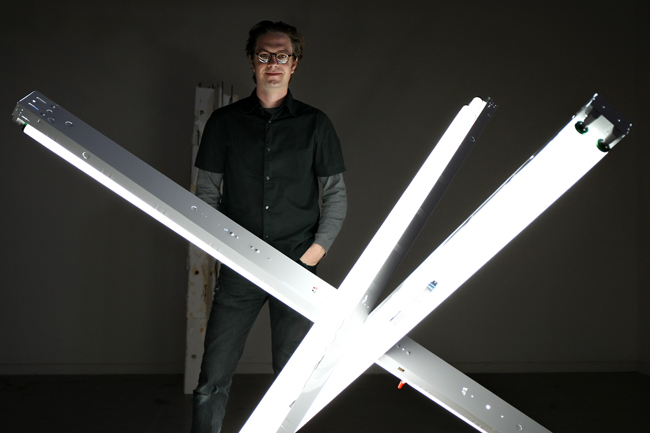 Fluorescent lights, cement blocks and a pair of gloves star as some of the main attractions in Adam Crosson’s new art installation, “Soft Wax.”

Crosson said the inspiration for his exhibition came primarily from two places: the creation and destruction of the European climate and the influential pieces of Paul Virilio, a French cultural theorist and urbanist. Virilio’s writing on the concept of occidental geometry — the regulation of diverse forms of representation — influenced Crosson’s construction of his featured pieces.

“Two of the primary objects come from this thinking of these occidental geometries: climates of war and climates of modernist architecture in the mid-century,” Crosson said.

Crosson, who received a fellowship last fall, spent the semester at the Royal College of Art in London. While there, he learned about European art and history, which he said had a major impact on his work.

“The work that I am doing now is established off of that first year of study, but more specially, it comes out of my experience in London,” Crosson said.

Rebecca Marino, Pump Project gallery director, said she was impressed with his work after only one viewing.

“I was really drawn to his use of materials and the subtle familiarity of the objects that he was making. And not only was the work strong overall, he has an interest in the qualities of ‘non-place’ alongside an architectural background that can definitely be seen in his work,” Marino said.

Crosson said he wants exhibit viewers to come away with their own interpretations of his work, without being told how to feel. Crosson said it is important for artists to look back at early art history, to see how
artists translate their energy to their viewers.

Katie Edwards, curator at UMLAUF Sculpture Garden & Museum, met Crosson after the museum awarded him the UMLAUF Prize — an award given to an outstanding UT Master of Fine Arts student. She said she would be happy to work with any student, but Crosson was a dream.

“‘Soft Wax’ was partly about making us aware of spaces we generally don’t think about,” Edwards said. “So, in a way, some of his sculptures makes us aware of the impossibility of certain situations.”

Crosson said he plans to move to Europe in the near future to further his art career.

“I think that being in an international setting for a few years, at least, will do my practice a lot of good and expand it in ways that staying here wouldn’t,” Crosson said.