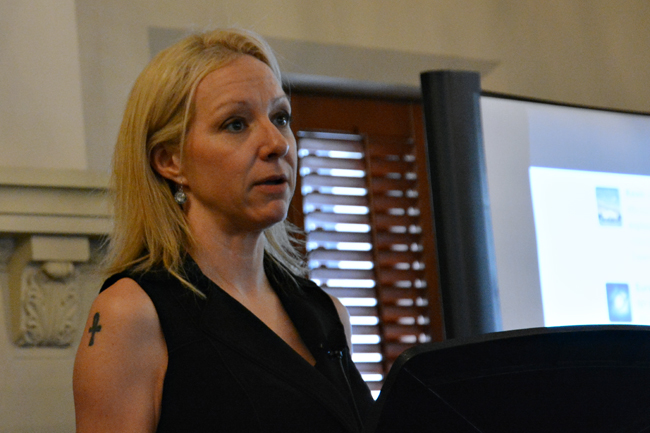 Modern-day conspiracy theories materialize from vast amounts of hyper-specific information gathered on the Internet, Jenny Rice, writing, rhetoric, and digital media professor at the University of Kentucky, said Friday in a talk at the Union.

“As I began to interview 9/11 truthers and joined Facebook groups devoted to 9/11 truth, as they call it, I very quickly found myself drowning in details, information and images and texts that circulated across these various groups,” Rice said. “The archive in conspiracy discourse is huge and also microscopic, often composed of time-lapsed images and still frames in order to give a second-by-second analysis.”

Rice said the Boston Marathon bombing is an example of an event that provided the “big data” theorists can collect on terrorist attacks. The marathon bombing, which took place in April 2013, killed three people and injured over 200.

“Such fine-grain attention to detail was seen in the truther community that sprung up overnight after the Boston Marathon bombing,” Rice said. “Many of the postings in online sites like Reddit and Facebook included intensive archival work.”

Rice said a distrust of the government often provides an underlying foundation for conspiracy theories, as evidenced by the Boston Marathon bombing.

“[Conspiracy theorists believe] the bombing was a false flag, which was perpetuated by the federal government in order to clamp down on civil liberties and take away guns,” Rice said. “The version of conspiracy is almost besides the point. Secrecy is at work. It’s nefarious. It must be revealed.”

“She was mentioning that the process of accumulation brings a certain type of enjoyment. That was one of the things I was taking out of it. To think about how processes are affected, I think, is integral to the ways we can kind of experience the world,” Albiniak said.

Sarah Frank, a rhetoric and history doctoral student, said the lecture overlapped with her doctoral work in history.

“I’ve been studying this woman who writes about doing history as mapping terrain, and she’s constantly gathering evidence to expand the map, and so what really clicked in the lecture for me was that the map could expand infinitely as you gather and accumulate more data,” Frank said.