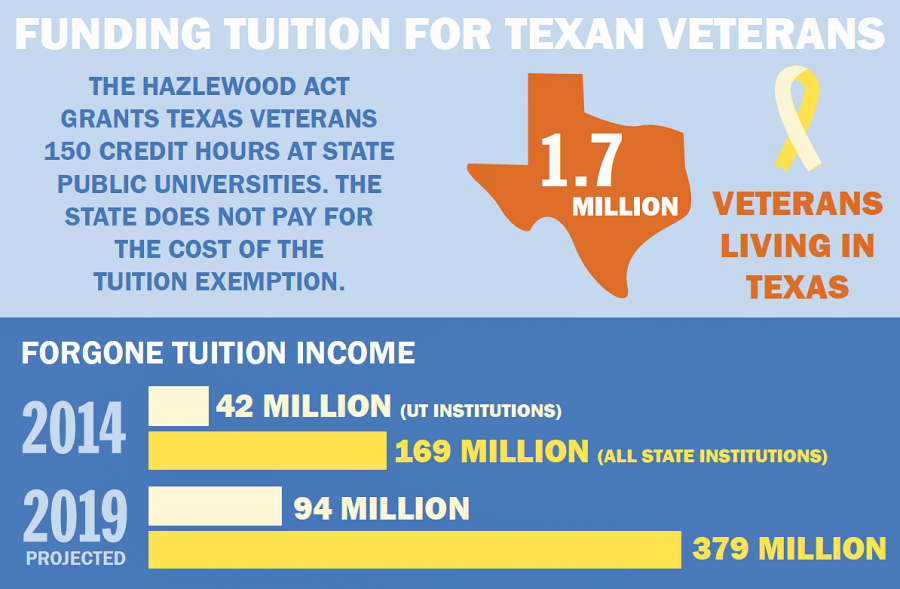 UT System Chancellor William McRaven is calling on lawmakers to help fund a tuition exemption for veterans that resulted in a loss of $42.1 million in forgone tuition at UT System schools in the 2014 fiscal year.

The exemption was established as part of the Hazlewood Act, which grants veterans who are Texas residents 150 credit hours in return for their service. UT System universities pay for a tuition exemption for veterans who have served at least 181 days of active duty service. McRaven said without state support, the cost is passed on to other students.

“When the state is not in the position to provide us those funds, then invariably it comes back and that goes on to other students that are coming in,” McRaven said.

At the end of January, a U.S. District Court judge ruled that a Hazlewood provision which restricted eligibility to military veterans only if they served while a resident of Texas was unconstitutional. Under the new ruling, veterans from anywhere in the country can receive the tuition exemption at Texas universities as long as they establish Texas residency, a process that requires living in Texas for one year.

“When you look at the federal judge’s ruling, some of the cost figures I’ve seen — and again I can’t verify them — but I’ve seen costs up to $2 billion,” McRaven said. “So clearly, we can’t absorb that kind of money in terms of support for Hazlewood.”

Covering the cost of veteran tuition amounts to $169.1 million in waived revenue for universities across the state, according to a report prepared by the Legislative Budget Board.

In a conversation with the Texas Tribune on Feb. 5, McRaven said colleges and universities have expected the state to pay for veteran education for years, but the exemption has remained an unfunded mandate.

“There was an expectation that the state would pay for the cost of the exemption,” McRaven said. “But it has never happened.”

McRaven said educational opportunities for other students are hampered without the state funding.

“All we’re asking is that the state consider [funding Hazlewood] because if not, what happens is that money that had been expected from the state is now impacting our ability to educate other young men and women,” McRaven said.

Jeremiah Gunderson, interim director of student veteran services, said he expects the number of veterans enrolled at UT, as well as other institutions, to grow in the near future.

“I think we will see an increase because of the large number of veterans who are exiting the military,” Gunderson said. “They’re doing a huge drawdown in the military; I believe the Army alone is looking to draw down 80,000 troops. I think, in general, colleges and universities are seeing an influx of new veterans coming to school.”

McRaven said it is important to continue to provide educational opportunities to veterans despite the challenges of Hazlewood.

“I think we need to continue to support the Hazlewood as it stands right now, and I look forward to working with the service veteran’s organizations to find out the ways that I can help them at each of the universities,” McRaven said.

Gunderson said Hazlewood has encouraged many veterans to become the first in their family to attend a college or university.

“I think it’s an outstanding opportunity, and a lot of statistics have shown that many veterans are first generation college students,” Gunderson said.