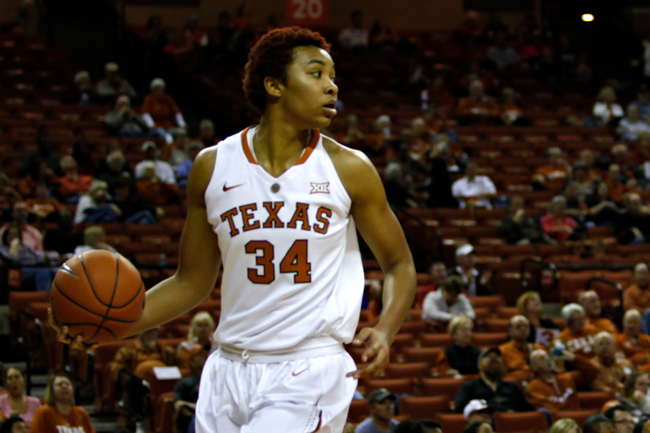 Texas played calmly in the first half, and its defense locked down early, holding the Jayhawks to 28 percent shooting. Freshman guard Ariel Atkins scored 15 points in the first half — more than half of Texas’ points in the period — but the Longhorns’ abysmal shooting and 10 turnovers gave them only a 1-point lead at halftime.

Texas improved its perimeter shooting from 33 percent in the first 20 minutes to 67 percent in the second half. Although Kansas shaved the deficit to 3 points midway through the second half, Texas showed resilience and continued to stay aggressive. Drawing fouls often, the Longhorns attempted 30 free throws and shot 73 percent from the charity stripe.

“They never got frustrated when Kansas made a run,” head coach Karen Aston said. “They didn’t get frustrated when they made mistakes. They stayed very calm, and I thought we executed some things really well.”

The Longhorns (16–8, 5–8 Big 12) received contributions from all their healthy players, including bench players, in the full-team effort. Sophomore guard Brianna Taylor, who started the game, scored 13 of her 15 points in the second half, while junior center Imani McGee-Stafford came off the bench to record her third double-double with 12 points and 16 rebounds.

“Imani had some great minutes off the bench, and Taylor was really solid,” Aston said. “I thought Ariel did a great job of playing the game. Our guards made better decisions off the [Kansas] zone [defense].”

Texas dominated the Jayhawks on the boards, outrebounding them, 50–27, including 18 offensive rebounds, which led to 17 second-chance points. Texas is now 15–2 when it scores more than 60 points but is 1–6 when scoring less than 60 points.

“Obviously we’ve handled some adversity, and sometimes it’s been good and sometimes not,” Aston said. “I’m really pleased with the team.”

The Longhorns look to continue their momentum at home Wednesday against Kansas State.