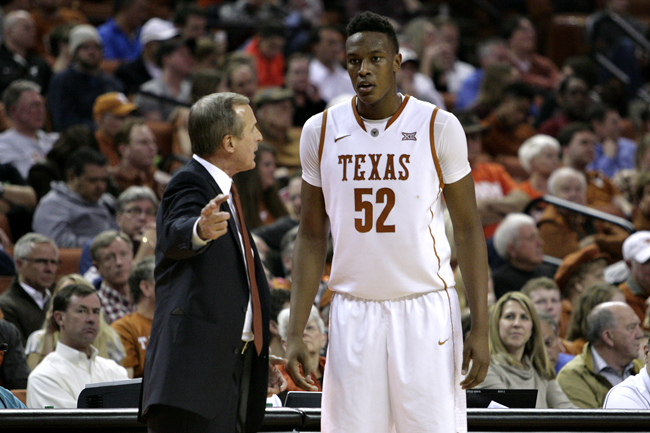 For the past few weeks, head coach Rick Barnes has faced questions about his job security.

His team, which many picked to unseat Kansas as the Big 12 champion, has struggled mightily on offense and finds themselves near the bottom of the conference. But Wednesday, after defeating TCU to earn his 600th Division I victory, Barnes was all smiles.

Instead of asking questions about what’s wrong with Texas’ offense or whether the expectations for Myles Turner are too high, all anybody wanted to know was how Barnes felt after reaching a milestone — one only 30 other coaches have reached.

But he didn’t want to talk about himself.

“I’m not just saying this, but winning the game tonight was more important than that,” Barnes said after the game. “Because I still have a lot of faith and confidence in this group of guys, and they deserve it.”

Then he went on to mention everybody else that helped him. He praised the athletic directors he worked with. He praised his players. He praised his coaching staff — even going on a bit of rant about watching the children of Todd Wright, his assistant of 21 years, grow up.

“I truly love what I do,” Barnes said. “But the best part really has always been the relationships and the interaction every day with people you enjoy being with.”

Growing up in Hickory, North Carolina, Barnes wasn’t a big-time player. He stayed in his hometown, playing at small-time Lenoir-Rhyne College before transitioning into coaching. At 33-years-old, he became a head coach at George Mason.

“Obviously, I’ve been fortunate and blessed,” Barnes said. “I became a head coach at a very young age, and I’ve worked for great institutions.”

Barnes has seen and done a lot in his career. He watched as future Hall-of-Famer Tim Duncan slipped right through his grasp at Providence, as the school’s president wouldn’t let Barnes sign the big man from the Virgin Islands without a scholarship open, despite the fact two of his players were in the process of transferring.

He then guided two Longhorns, T.J. Ford and Kevin Durant, to National Player of the Year honors while taking Texas to 15 NCAA tournaments in 16 years.

Nearly everyone around him likes playing for him. If his players ever want to talk, he is available. He spent hours on the phone with Ford. Recently, he has mentioned long late-night conversations with senior forward Jonathan Holmes and freshman Myles Turner.

“He teaches us how to grow up and be men — helps us grow both on and off the court,” junior guard Javan Felix added.

But while the regular season wins keep piling up, the big ones still elude him. He’s 20–20 in the NCAA tournament, making just one Final Four appearance in 2003. He’s won just one post-season conference tournament championship at Providence in 1994.

For him, 600 isn’t a goal, but a part of the path. And Tuesday night, that path leads him to Norman, Oklahoma, to take on the No. 17 Sooners to start a brutal stretch of five straight games against ranked opponents.