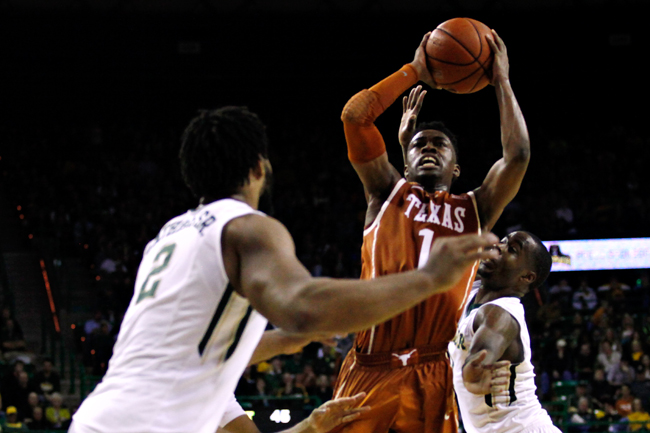 After putting together a dominant stretch early this month in which it won three straight games by at least 18 points, No. 20 Baylor has fallen on hard times in the past week.

Fortunately for the Bears, their remaining schedule isn’t too demanding. Only two of their final six games are against ranked opponents, including two against Texas Tech (2–11 Big 12).

Nash, who averaged 20.5 points, 12 rebounds and 4 steals in the Cowboys’ two games last week, is in the midst of his finest season at Oklahoma. He’s averaging career-highs this year with 17.2 points, 5.7 rebounds and 1.9 assists. Monday marked the second time in his career, the first this season, that he’s earned Big 12 Player of the Week honors.

Ellis averaged 16 points and 7.5 rebounds in Kansas’ two wins last week. He became the 56th player in Kansas history to reach the 1,000 career points mark in Saturday’s win over Baylor.

Oklahoma junior guard Buddy Hield has been on quite the run lately.

Hield, who leads the Big 12 in scoring, has scored in double figures in 19 consecutive games. He’s been especially good in conference play, scoring at least 20 points in six of his 13 games against Big 12 opponents.

Hield is setting career-bests this season with 17.4 points, 5.3 rebounds and 2 assists per game, and he’s been the biggest reason behind the Sooners’ climb to third place in the Big 12 standings.

Iowa State a different team on the road

No. 14 Iowa State, along with No. 8 Kansas, has been one of the two best teams in the Big 12 all season long. But the Cyclones haven’t been nearly as good on the road this season as they have been at home.

The Cyclones are just 2–4 on the road this season, including 1–4 against Big 12 teams. They’ve lost four consecutive games against conference opponents, including one against bottom-feeding Texas Tech.

It hasn’t mattered much though, as Iowa State has used its 16–2 home record to remain in good shape for a high seed in the NCAA Tournament. Still, their struggles on the road don’t look  for their hopes in the tournament, where all of the games are played at neutral sites.

The Cyclones will look to reverse their road woes Wednesday against No. 22 Oklahoma State.