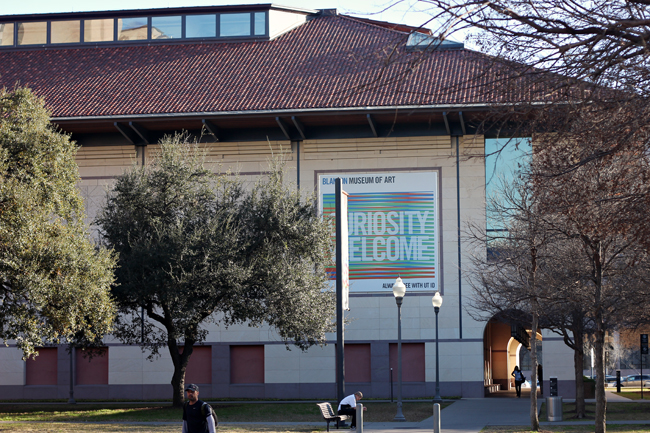 Many museums prohibit people from using selfie sticks in art exhibits, and the Blanton Museum is no exception, as detailed in an official statement from the museum Monday.

A selfie stick is a hand-held extender that attaches to smartphones and is used to take photos of large groups of people.

“We are in the midst of revising our in-gallery photography policy, and as part of that policy, we will be retaining a prohibition on tripods and monopods, including the Selfie Stick,” Blanton officials said in the statement. “We encourage visitors to take photos in our galleries, but we must ensure the safety of the objects in our care, and bringing objects like selfie sticks, umbrellas or tripods into the galleries puts those objects at unacceptable risk.”

Several museums, such as the Hirshhorn Museum in Washington, D.C., have already banned the use of selfie sticks this month. Others, such as the Museum of Fine Arts in Houston, plan to ban them in the future.

Although the selfie stick has potential to damage artwork, museums are becoming more lenient about their rules on pictures, especially since many people visiting museums have access to smartphones with cameras, according to art history professor Louis Waldman.

“I personally love taking pictures in museums, but it shouldn’t become a substitute for actually looking,” Waldman said. “Seeing art is a slow process that rewards patient effort. Just like getting to know a human being, you can spend hours and hours with a piece of art, and you’ll always keep discovering new things about it.”

The selfie stick can photograph a larger number of people because it extends past the reach of an arm, according to Amy Mulkey, communication sciences and disorders junior.

“I like it because I love taking pictures with friends, and the selfie stick is a good way to take a picture of a big group of people,” Mulkey said.

Some private owners are averse to big groups of people taking pictures with their art, according to Rachel Quist, art history and Plan II senior. Quist said artists and museums have a lot of reasons to ban pictures and selfie sticks, and she thinks the artists’ requests should be respected.

“There’s a reason some things are kept in really dim lighting. Really old images or images made out of sensitive materials can be significantly affected by the flash of a camera, especially repetitively,” Quist said. “If you like the image enough to take a picture of it, you should respect that you could be contributing to its deterioration.”

“You might not be in the picture, but I just think that’s secondary to the preference of the owner of the image,” Quist said.