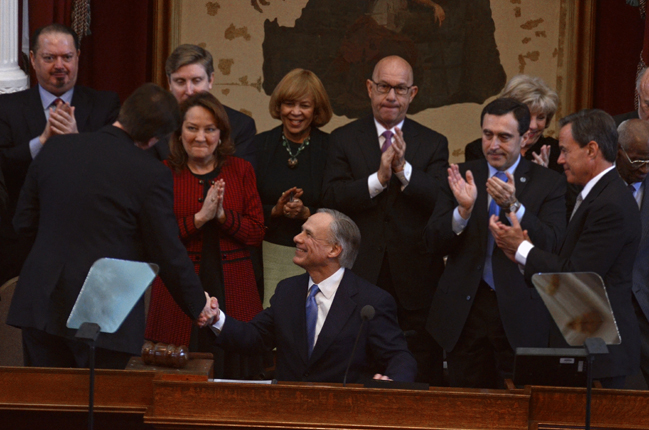 Gov. Greg Abbott made higher education research an “emergency item” in his first State of the State address Tuesday.

In his speech at the Capitol, Abbott urged lawmakers to prioritize legislation related to funding higher education research initiatives. He also said the state should work to create more tier-one research institutions to benefit Texas’ economy.

“My budget jump-starts the process of elevating Texas higher education into the highest echelons by committing a half-billion dollars to enhance research programs and attract nationally recognized researchers and Nobel laureates to Texas universities,” Abbott said.

Abbott’s budget, released Tuesday, allocates about $56 million to the Texas Higher Education Coordinating Board from the Texas Emerging Technology Fund to attract prominent researchers to state universities. He also allocated $40 million to current and emerging research institutes. The budget does not go into detail on how the money will be distributed between different universities.

Additionally, Abbott’s budget allocates between $400 and $540 million to the Cancer Prevention and Research Institute of Texas for cancer research at higher education institutions and about $532 million in tuition exemptions for veterans and their families.

Abbott said he also plans to sign a law that will make Texas the 45th state to allow the “open carry” of guns.

“It is a basic second amendment right for citizens in that it allows them to carry their handguns visibly,” Bridget Guien, College Republicans communications director and economics freshman, said.

Abbott said he is looking to deploy 500 new state troopers and double border-security spending. Ashley Alcantara, Plan II sophomore and communications director of University Democrats, said she disagreed with Abbott’s plans to increase border security, although she appreciated his focus on early and higher education.

“I think it’s a lot more effective to work with immigration reform instead of simply throwing money at the border,” Alcantara said.

State Sen. Rodney Ellis (D-Houston) said he appreciated that Abbott made an effort to reach across the aisle in his speech, but said he found Abbott’s support of open carry troubling.

“The devil is always in the details,” Ellis said. “The question is whether open carry in Texas is a throwback to the ‘Wild Wild West,’ or something which is far more reasonable, which I’m convinced most of those [44] states probably have.”