Texas looks to improve after tough series against Rice 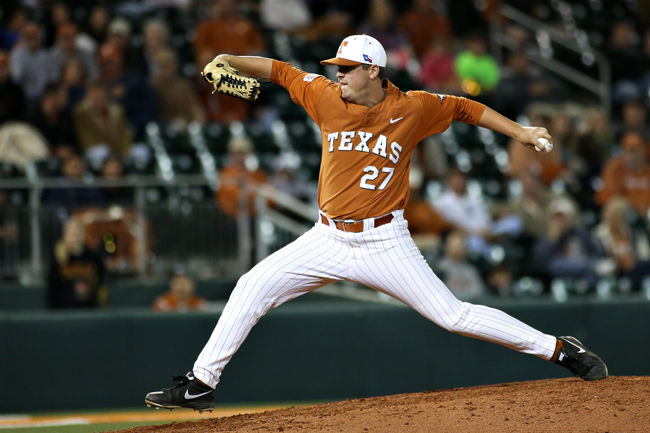 Fresh off a thrilling 4–3 extra-inning win, the Longhorns will play their home-opener Tuesday as they take on the UTSA Roadrunners at UFCU Disch-Falk Field.

The Roadrunners (2–1) are coming off of a weekend-series win over Louisiana-Lafayette, while No. 6 Texas (2–2) split its four-game opening series against Rice.

The Longhorns will look to build off of their series against the Owls. While the Longhorns struggled in Saturday’s doubleheader, Texas’ hitters and pitchers performed well.

Aside from sophomore pitcher Kacy Clemens, the Longhorn starting pitchers had good outings against the Owls. Clemens struggled in his first collegiate start, only completing three innings in which he gave up eight runs on eight hits.

While the starting rotation had a solid weekend, head coach Augie Garrido hopes to get more innings from his starters.

“[The starters] can go five innings in a practice environment,” Garrido said. “But, when you add the adrenaline rushes they get when they’re competing in games, it does take innings away from them. That’s what I think happened. They’re just pumped.”

Additionally, the Longhorns hope to continue to get help from their relievers.

“I think [Bellow and Culbreth] really field their positions well, have good makeup, and they can pick guys off at first and still throw strikes,” Garrido said. “Situations don’t rattle them much. They have been through a lot. We have high hopes for them, and we very much need them.”

“He looked really relaxed, and the mature sign of his relaxation and his confidence in himself was, first of all, even recognizing the pickoff sign, and then executing it to almost perfection,” Garrido said. “He was really aggressive but still under control. That might be the highlight of the whole weekend.”

Against the Roadrunners, Texas will look for continued performance from their hitters. Senior outfielder Collin Shaw, sophomore catcher Tres Barrera and junior outfielder Ben Johnson had productive weekends at the plate.