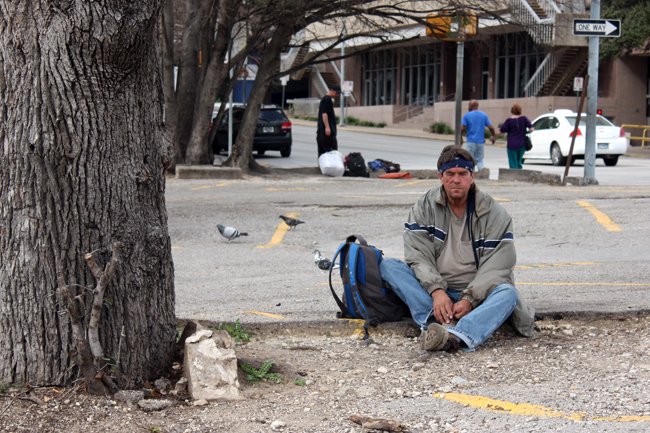 One sector of Austin’s street community may be seen ambling down the stairs of the University Baptist Church each Sunday, ready to spend a few hours in the safety and comfort of the church basement where computer access, phone chargers, hot meals and art supplies abound. Another community frequents the alley behind Jamba Juice at the juncture of Guadalupe and 23rd streets. And a third group of street community members dots storefronts on the Drag. With fishing nets, cardboard signs or even flowers to sell, men and women of all ages and ethnicities look to forge a living on the campus thoroughfare.

Each of these communities helps comprise Austin’s homeless community. Shifting between the church, alley, Drag and other locations, these self-described homeless men and women have made for themselves a home.

Cross Guadalupe Street and this changes. Members of the homeless community rarely enter the 40 Acres due to UTPD’s strict rules against campus trespassing. Last week, however, two men did.

The incident left some students unsettled and surprised that aggravated assault can occur on campus so suddenly. But we must not view this as a reason for fear, intimidation or reason to cast blame. Rather, we should use the incident as a means to reorient ourselves with campus safety policies and spur dialogues.

The campus sees a limited number of trespassers each year. UTPD reported 78 cases of criminal trespassing in 2014, or an average of 6.5 a month. But this includes student arrests as well. UTPD arrested 22 criminal trespassers in April 2014 —almost double the next most active month (12 in September). Eighteen of these were students arrested for entering the Tower to protest against the University’s Shared Services policy. Take out that escalation, and the number drops to just five per month.

Even more so, knife incidents are practically nonexistent. UTPD reported just a single instance of assault via knife or cutting instrument through the entire 2014 calendar year. Statistically, then, this month’s incident took care of the quota.

In terms of an ongoing threat, the stab doesn’t appear to be a planned  attack, nor did it target UT students or faculty. It was merely a fight between two men, and it unfortunately escalated to physical aggression. As soon as it took place, bystanders called emergency services. UTPD and EMS officials arrived, investigated the incident and took appropriate action.

UTPD has successful safety protocols in place. Its manual for disruptive individuals — defined as those threatening physical harm, bearing weapons, under the influence or behaving “in a bizarre manner or [with] unstable behavior patterns” — is extensive and clear. Call UTPD, describe the subject and location, remain confident and manage the emotional climate.

From the statistically minimal on-campus violence to the effectiveness of UTPD policy, Longhorn students and faculty alike need not worry of on-campus danger. But we must go one step further than just feeling safe ourselves —we must also take care not to spin this incident into a stigma. Though these two men were homeless, the incident doesn’t represent the typical behavior of the homeless community. At the very most it may point to mental illness, with which we should sympathize and treat.

Shying away from the street communities near campus and West Campus will not help assuage threats, nor will it solve any of these problems. If any action is appropriate, it should be extending a hand to this community and showing them that they, too, are welcome in Austin. Decreasing hostility is the most effective way to discourage violence.

A host of stereotypes and stigmas surround the homeless men and women on the Drag, many of which we don’t take the time to examine. Following instances like last week’s assault, we are confronted with these questions.

Last week’s assault on campus was far from ideal. But it’s our responsibility to take the negative incident and turn it into something positive. We have an opportunity to open dialogues on campus: dialogues about campus safety, UTPD responses and the interaction between students and homeless communities. We shouldn’t pass the opportunity — or the homeless men and women along our daily commutes — by.