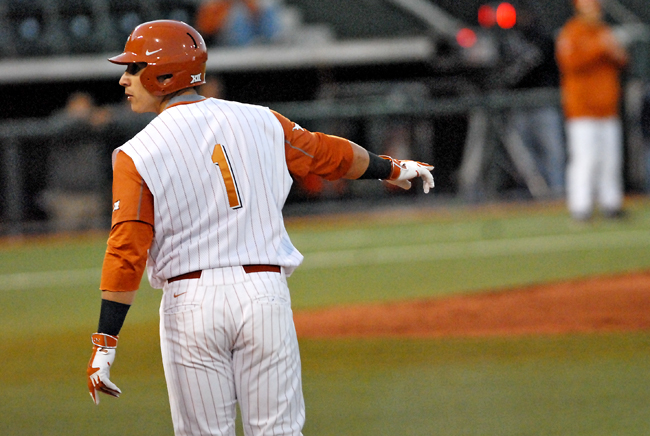 With the Longhorns up by only a run in the bottom of the seventh, Johnson drilled a single up the middle, which UTSA misplayed, allowing Johnson and all three base runners to score – increasing Texas’ lead to 7–2.

“I didn’t even think that ball was going out,” Barrera said of his home run.

Coming off a comeback win over Rice on Sunday, Texas seemed to have the upper hand. After freshman pitcher Connor Mayes opened the game with a quick 1-2-3 inning, senior right fielder Connor Shaw and junior shortstop C.J Hinojosa drilled singles, and Barrera followed suit to bring home Shaw and give the Longhorns a 1–0 lead.

Two innings later, Barrera and the Longhorns struck again. Hinojosa opened the inning with a four-pitch walk, followed by a Barrera double to score Hinojosa and double the Texas lead.

UTSA fought back in the fourth. After redshirt senior pitcher Ty Marlow hit senior catcher John Bormann in the head, Bormann advanced to second on a ground out, and freshman second baseman Skyler Valentine laced a single to left to score Bormann and get the Roadrunners on the board.

Following an RBI double by Johnson in the bottom of the fourth to stretch the Texas lead back to 3–1, UTSA came back in the top of the sixth. Junior shortstop Tyler Straub and sophomore designated hitter Mitchell Matulia drew back-to-back walks, and Valentine again drilled an RBI single to close the deficit to 3–2.

But Texas finally broke the game open in the bottom of the seventh. With the bases loaded and two outs, Johnson singled up the middle, only for junior center fielder Kevin Markham to let the ball go under his glove. As the ball continued rolling toward the wall, Johnson made back home without a play, upping the Longhorn lead to 7–2.

In the eighth, Barrera showed off his power, getting every bit of the pitch and sending it into the parking lot beyond left field for a three-run home run. The long ball sparked a six-run inning for the Longhorns, in which 12 batters came to the plate.

Barrera became the first Texas player since 2010 to record six RBIs, finishing the night going 5-for-6, including a double and a home run. Johnson ended the game 3-for-6 with three RBIs.

Texas returns to the field this weekend for a four-game series against Minnesota.