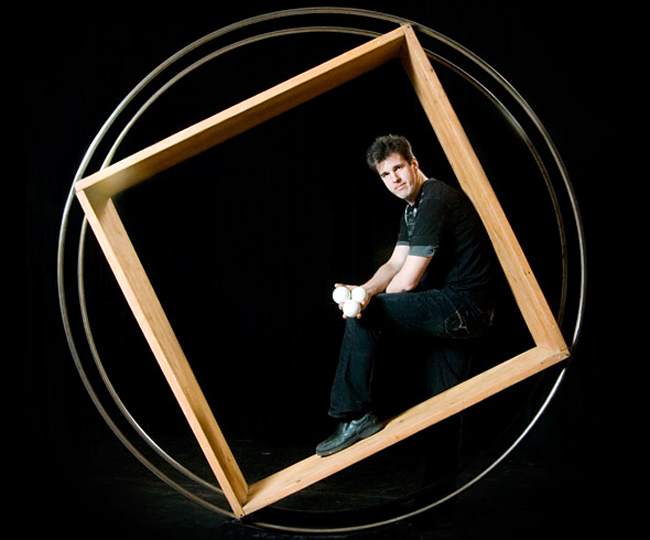 Over 10 years ago, Greg Kennedy took a three-month leave of absence from his engineering job, packed up his bags for Japan and set off to pursue a brief stint as a performance juggler. That sojourn turned into a career as the “Innovative Juggler,” who will perform on campus Thursday.

Kennedy received an engineering degree, but, rather than pursue this field as a    career, he uses his knowledge to spice up his juggling act. Instead of throwing and catching a ball in the air, Kennedy said he experimented by bouncing balls on different sculptures — all of his own creation — and seeing the different things he could make the ball do.

“I started applying some of my engineering principles and just basic principles of geometry and physics into the design of these [sculptures],” Kennedy said.

Although only about one out of every three of his sculptures makes it into his show, Kennedy said his passion for creation and innovation keeps him designing and planning the ideas in his mind.

“Once in a while, you see that little gem and you say, ‘Wow,’” Kennedy said. “It’s almost like having a child. You’re taking something that you’re putting into this world that has never existed before.”

Kennedy said he especially likes to combine engineering and art to create innovative “pieces” — what Kennedy calls his short performances.

The 22nd annual Jugglefest kicks off with Kennedy’s show “Innovative Juggler” — an hour-long performance that involves traditional juggling, clean comedy and innovative use of props. The three-day event, which the Texas
Juggling Society puts on, begins Friday. The weekend consists of workshops, games, demonstrations and juggling shows. Kennedy performs Thursday at 8 p.m. in the SAC Auditorium.

“[Kennedy’s] specialty includes lots of innovative props,” Blanco said. “He’s always got something new, and he’s got a lot of things no one else is doing or has thought of doing in his juggling act.”

Kennedy said he never intended to become a professional juggler.

“I always juggled as a kid,” Kennedy said. “It was kind of a hobby, and I actually got really good at it to the point where I won a gold medal at the international juggling championship. But I was still not really thinking of doing it as a full-time job.”

After graduating college, Kennedy entered the engineering field. Two years into that career, Kennedy felt the job no longer challenged him. Around this same time, his friend offered him the opportunity to perform juggling shows in Japan. Kennedy said he took the offer and never looked back.

“I feel like I use my engineering degree a lot more today than I did when I was an engineer,” Kennedy said. “In the late ’90s, I kind of began experimenting and just altering what people think juggling is. I kind of thought, ‘Hey, how can I change that path?’”

Little by little, Kennedy gained a following in the juggling community. His “Cone Piece,” which garnered more than 2 million views on YouTube, features Kennedy standing inside a giant cone and bouncing balls off the sides.

In another piece, “The Rotating Square,” he draws inspiration from Leonardo da Vinci’s sketch, “Vitruvian Man,” which features a man inscribed inside a circle and a square. Kennedy acknowledges that, although juggling may seem hectic to onlookers, he finds calmness in its repetition.

“One of the nice things about that piece is how many times the ball can bounce,” Kennedy said. “It’s very interesting because, to the audience, it’s very chaotic. But, to me as the juggler, I’m throwing and waiting, throwing and waiting. I just love that cycle.”