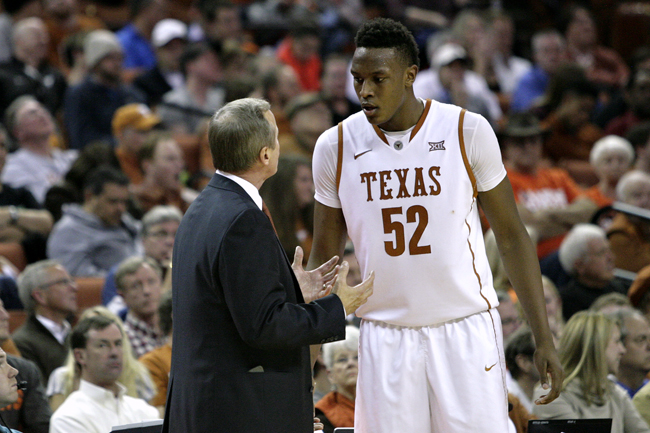 The second Myles Turner signed, many thought that Texas could win the National Championship.

Turner being on a team that made it to the third round of the NCAA tournament the previous year had fans hopeful.

Turner was Texas’ highest-rated signee since Avery Bradley in 2009, and, although Bradley did not really improve during his lone season in Austin, there were some reasons for fans to be optimistic about Turner’s impact on the team. Although Barnes has recently struggled to develop highly touted guards, he helped improve forward Tristan Thompson into the No. 4 overall pick during his lone season in Austin.

Turner’s addition meant another big man in Texas’ frontcourt rotation, and that should have been a key factor in the Longhorns pursuit of wins. Plus, the versatility of his offensive game was supposed to help offset one of the team’s most blatant deficiencies: the lack of reliable 3-point shooters.

This has not been the case, though, as the offense is producing 107.1 points per 100 possessions — just 0.1 points more than it scored per 100 possessions in 2013–2014. These offensive woes are being magnified in conference play, in which the Longhorns are averaging 7 fewer points against Big 12 foes and giving up 11 more points per game than they did throughout non-conference play.

Meanwhile, Turner isn’t logging the amount of minutes expected from a player with his unique skill set on both ends of the court.

His playing time ranks fifth on the team, and that may not even be the result of a crowded frontcourt, In fact, Turner’s minutes dropped slightly in the two games senior forward Jonathan Holmes missed because of a concussion.

Turner followed his 25-point, 12-rebound performance in Saturday’s win over Texas Tech with 17 points and 10 rebounds in Tuesday’s loss at Oklahoma. The loss to the Sooners was the first time the Longhorns lost a game in which Turner finished with at least nine rebounds.

This season being Turner’s only one at Texas is certainly a possibility, and, with back-to-back double-doubles, it appears that he’s ready to be the best player on the floor. The question still remains whether Barnes will actually give the Thompson-esque freshman playing time down the stretch.

With only five games left before the conference tournament and Texas needing to win more games to make the field of 68, the time is now for Turner to log significant minutes. If the Longhorns are to make a run in March, their talented freshman will need to lead the way.