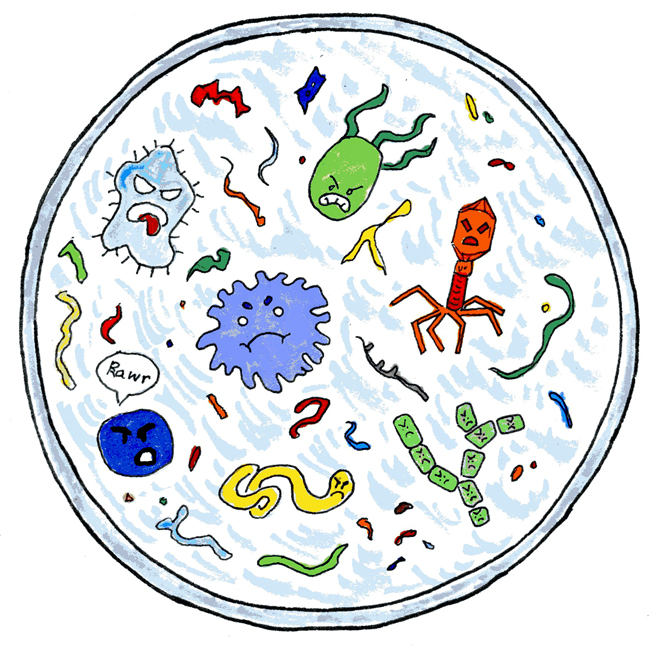 There are deadly diseases on campus. They are not carried by birds, squirrels or freshmen — they live in a few of the hundreds of labs. Scientists at UT take the strictest precautions to ensure these pathogens do not reach students.

These precautions are organized into levels labs must comply with: biosafety level (BSL) 1, 2, 3 and 4. BSL-1 and BSL-2 labs store viruses, bacteria or fungi that are well-understood, treatable and not particularly contagious. BSL-1 labs deal with pathogens that do not usually cause a noticeable illness in humans. For example, they may carry the canine hepatitis virus or a non-threatening strain of E. coli. BSL-2 labs carry mildly infectious viruses or bacteria, such as the
salmonella bacteria.

The highest biosafety level at UT is BSL-3. BSL-3-level defenses are used for pathogens that could be deadly if inhaled. However, specimens stored in BSL-3 labs have a vaccine or an effective treatment plan. Scientists can study the bacteria responsible for the bubonic plague in a BSL-3 lab but not the Ebola virus. Other specimens scientists can study in BSL-3 labs include West Nile, SARS and rabies viruses.

BSL-3 labs on UT campus are located within a lower lab level. The labs are about the size of a large bedroom cabinet, with the specimens sitting on an arm-level shelf. Researchers reach their hands underneath a glass window, with gloves covering their hands and arms. The glass protects the worker’s face and body from the pathogens. Air runs toward the inside of the cabinets, and vents vacuum it up so that the researchers are never exposed to disease-filled air. Even with these precautions, the workers may choose to wear respirators — breathing equipment that resemble gas masks. Anything inside the BSL-3 area must be decontaminated with strong chemicals or high temperatures before it can be removed. Labs use BSL-4 precautions while working with diseases that easily transmit through the air and cause crippling or deadly illnesses that have no vaccines or viable treatment options.

There are no BSL-4 labs on campus, but scientists at UT-Austin sometimes use data that scientists at the University of Texas Medical Branch at Galveston gather for further research. There are only 15 BSL-4 labs in the world, and the UTMB branch has two. According to the UTMB website, scientists there study pathogens that cause illnesses such as anthrax, hemorrhagic fevers and drug-resistant tuberculosis.

These biosafety regulations may seem thorough, but they are not A&M-proof. In April 2006, inspectors from the Center for Disease Control and Prevention found that a worker at a high-containment lab at A&M was exposed to and infected by contagious bacteria. According to further government investigation, the same lab was performing unauthorized experiments and taking infected animals out of the lab without permission. It’s easy to snicker at the Aggies, but, as the CDC official wrote, “No one knows whether the Texas A&M incidents are the tip of the iceberg or the iceberg.”

This disaster at A&M led to a further investigation of Texas laboratories, and that inquiry  found 13 mostly mild “incidents” in the UT system. Some workers at the UT Health Sciences Center were exposed to anthrax, but investigators did not record any infections. Maintenance workers failed to wear proper protective equipment while fixing the air filter at a lab at UT-San Antonio, but they did not become ill. Four workers on the UT-Austin campus became sick after exposure to Shigella bacteria, which causes abdominal infections. While this infection is uncomfortable, antibiotics can clear it up and all of the workers made full recoveries.

For a university system that stretches across the state and includes more than 100,000 students, 13 incidents over seven years may seem like a reasonable price of admission for the right to do research on infectious diseases. However, these mishaps caused UT-Austin to implement improved training programs, a new “Rapid Response Team” and an upgrade to research surveillance tools.

Scientists need to manage diseases in the most effective way possible, whether during daily encounters or an emerging pandemic. This means that what stands between the UT-Austin community and BSL-3-level diseases are physical barriers and the good judgements of researchers.

UT scientists maintain the highest standards of safety to uphold the reputation of the University, and, more importantly, the health of the students and faculty.