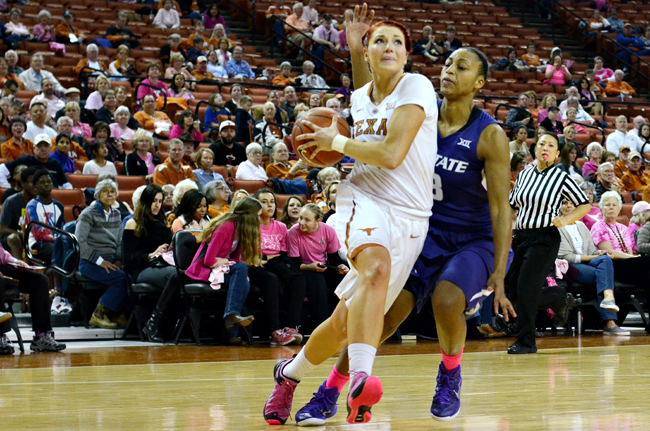 Sanders’ 18 points and four 3-pointers were both career highs, and Texas collectively found its pace by not rushing shots and playing better defense.

“I thought Brady got us off to a terrific start and really calmed our team,” Texas head coach Karen Aston said. “Then we settled in and played a nice game.”

“There were a lot of great decisions made,” Aston said. “Basically, I thought everyone who went into the game contributed something, so, overall, it was a really good team performance.”

The Kansas State 2-3 defense forced errant shots from Texas, as the Longhorns missed their first seven field goals. But the buckets started to fall when Sanders hit the team’s first shot.

“Really my only focus was getting the win,” Sanders said. “And it just so happened that my shots fell tonight, and my teammates put me in a good position to score.”

“When she’s out there smiling and laughing on the court, it gives us the confidence to be like, ‘Oh, okay, she’s having a good time, so we can too,’” Atkins said.

With injuries striking the team hard, Aston said the Longhorns continued to find ways to fit into unfamiliar roles.

“Their roles changed so much,” Aston said. “But I do think we’ve had some constancy with what we’re asking each person to do, so I think that gives them some comfort … and allowed them to settle in. I think they’re having some fun now, which is good to see.”

Sophomore center Kelsey Lang, who didn’t score her first point until early in the second half, ended the game with 9 points and four boards, while junior center Imani McGee-Stafford had 11 points and grabbed five rebounds.

Texas won the turnover battle against a Kansas State team that ranks second in the conference with 9.1 steals per game. The Longhorns caused 19 turnovers, eight of which were steals.

Texas sits three games away from a 20-win season, one of the early goals for the team, according to Aston. With four regular season games remaining, the Longhorns look to continue their winning streak with a game against Texas Tech on Saturday.

“I do think that [the team] is confident, but it’s one game at a time,” Aston said. “We worried about tonight, and tomorrow we’ll wake up and start figuring out how to win in Lubbock. We don’t need to look past that at all.”