As season winds down, Texas women’s basketball seeks to capitalize on momentum 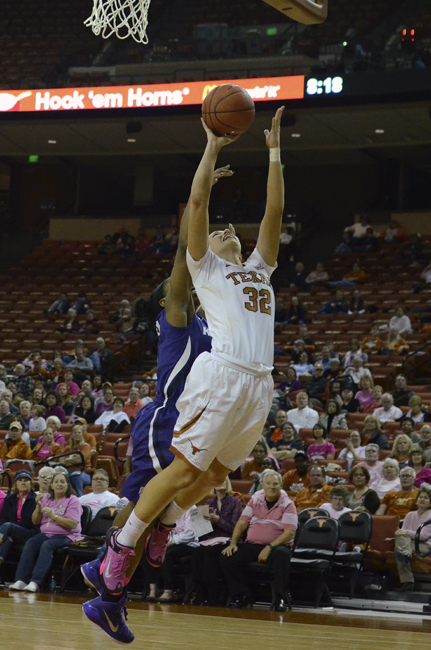 After a year filled with injuries and adversity, Texas finds itself just three wins away from a 20-win season.

With four games remaining, the Longhorns (17–8, 6–8 Big 12) look to keep its recent momentum rolling against Texas Tech on Saturday in Lubbock.

After defeating Kansas State on Wednesday 76–58, Texas tallied its largest margin of victory since defeating Texas Tech last season. While the Longhorns have now won two back-to-back games, and head coach Karen Aston thinks every remaining game is winnable, the team is just focusing on Texas Tech for now.

“We don’t need to look past [the Texas Tech game] at all,” Aston said. “We just need to take one game at a time and finish as strong as we possibly can.”

After a season-ending injury to senior forward Nneka Enemkpali and after other scattered setbacks, the Longhorns feel a sense of urgency to finish the season on a winning note. Through the past few games, Texas feels it has started to regain control of its season.

“We finally have some positive momentum moving forward,” junior guard Brady Sanders said. “We’ve done a good job taking one practice at a time, one possession of a time and one game at a time. So now, we have to keep this positive energy going into Tech.”

Texas Tech (15–11, 5–9 Big 12) is coming off a 67–60 defeat by No. 3 Baylor on Wednesday. The Lady Raiders, who made a season-high of 11 three-pointers off 20 attempts, rank third in the conference in three-point field goal percentage, shooting at 35 percent this season.

Texas Tech is the sixth opponent to hold the Lady Bears to a single-digit victory this season. Tech ranks fifth in the conference in scoring defense, with opponents tallying an average of 59.1 points per game.

Texas will look to contain Tech senior guard Amber Battle, who leads the team with 16 points per game, while freshman forward Dayo Olabode averages a team-leading 6.2 boards per game.

Aston said the Longhorns feel they have started to hit a stride in their season.

“We are shooting the ball better and have better timing offensively,” Aston said. “We just look more comfortable with what we are doing. The tempo seems to have picked up for us just a little bit.”