First gay marriage in Texas should not also be the last 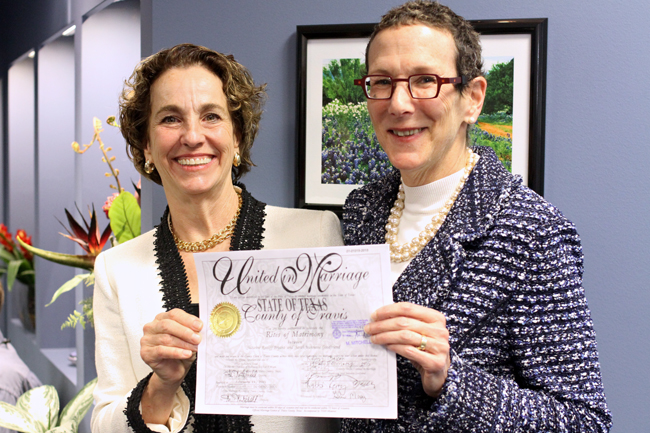 Sarah Goodfriend and Suzanne Bryant were married Thursday morning in Austin. They are the first same-sex couple to get married in the state of Texas. They were married as a result of a court order issued by State District Judge David Wahlberg in reaction to the news of Goodfriend’s diagnosis with ovarian cancer. But now that the Texas Supreme Court has stayed all future such marriages, much remains in doubt. Still, we hope that this is just the first of many same-sex marriages in Texas.

The tide is turning as more and more states are lifting bans on same-sex marriage, either by popular initative or by court order. Gay marriage is currently legal in 37 states. In 2012, only eight states allowed marriage between same-sex partners. Although the  marriage was performed under special circumstances and the county clerk’s office has no intention of issuing more same-sex marriage licenses except under court order, the fact remains that a gay couple were legally married in a red state where bans on “sodomy” are still in place in the state penal code. We hope progress in the courts will not make this a one-time occurrence.

Predictably, Republican Attorney General Ken Paxton has requested a reaffirmation of the state constitutional ban on same-sex marriages from the Texas Supreme Court in response to a probate judge ruling the ban on such marriages unconstitutional. In addition to the Supreme Court’s decision Thursday, Paxton hopes to reverse progress by having Goodfriend and Bryant’s marriage voided, a move that had not been successful as of our Thursday deadline. But while Paxton’s political pandering, and the Supreme Court’s acquiescence, may play well with the religious right, he clearly hasn’t considered the concerns of the morally right.

Goodfriend and Bryant’s unbridled joy after their marriage is evident in the pictures and video released from the event. These two women love each other, have raised two daughters and are now fighting cancer together. Their passion and dedication reflect an ideal of marriage that any couple, gay or straight, would strive for. The opposition needs to move beyond the shallow consideration of gender and ask itself what it thinks marriage is truly about. This couple fits the bill.

Paxton and those opposing this long overdue marriage are operating on the basis of their hidebound ideals. Their idea of small government ironically includes managing the personal lives of their constituents based on personal beliefs and revulsions. It is time to catch up with the rest of the nation and allow these couples to marry because they deserve the benefits that come with marriage, especially in situations like Goodfriend and Bryant’s. Let them remain married and make it so others can do the same.