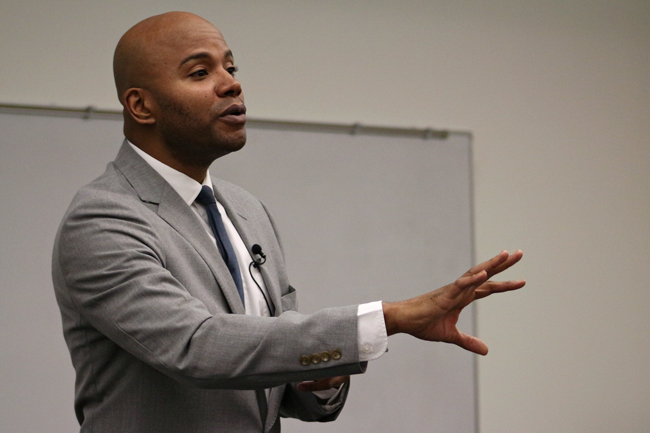 Although there has been progress in American race relations over the past few decades, events such as those in Ferguson, Missouri, signify an ongoing adverse relationship between government policies and African-Americans today, according to Peniel E. Joseph, founding director of the Center for the Study of Race and Democracy and history professor at Tufts University.

In August, white police officer Darren Wilson shot 18-year-old African-American Michael Brown, who was unarmed. Brown’s death, and the fact that Wilson was not brought to trial, prompted months of protests and demonstrations that are still ongoing in Ferguson.

Joseph said he thinks the gap between democratic rhetoric about race relations and the reality of minority experiences is detrimental to the American democratic process.

“People are talking about race because Ferguson is illustrative of all these inequalities that face us and that, in a lot of ways [and] in our popular imagination, we refuse to confront,” Joseph said. “We believe that we’ve earned this victory — whether we’re saying Rosa Parks, Martin Luther King, Obama — we’ve somehow gotten our way out of racism, which is why we’re so often ready to embrace post-racialism.”

Between 1980 and 2015, the population of U.S. federal, state and local prisons increased from 350,000 to 2.4 million, according to Joseph. By 2007, there were more African-Americans in prison, on parole and on probation than those who were enslaved in 1850, Joseph said.

“One of the major problems that we face in the last 50 years between Selma and Ferguson is this issue of not just criminal justice, but the criminal justice system’s connection to different democratic institutions in our society,” Joseph said. “When we think about this issue of mass incarceration, it is the civil rights issue of our time.”

“I think, so often, quantitative data, historically, has been used in a way that’s negative for communities of color, and so I’ve been trying to connect how I use the skills that I’m getting here and then apply them to issues I care about, and, a lot of times, there’s an activist component to that,” Anway said.

Policies and the language in which they are written have the potential to affect the way different communities are perceived, said Loyce Gayo, African and African American diaspora junior.

“We can’t talk about the recent attention that’s being exerted towards the death of all these black people without talking about how they’re being perceived — a young child being killed because they’re viewed as aggressive; they’re viewed as brutal,” Gayo said. “Now, we’re entering this new age of protest and this new age of awareness of race, and I’m trying to see where we’re about to go.”