Texas’ offense takes off in new season, but Garrido has greater offense goals 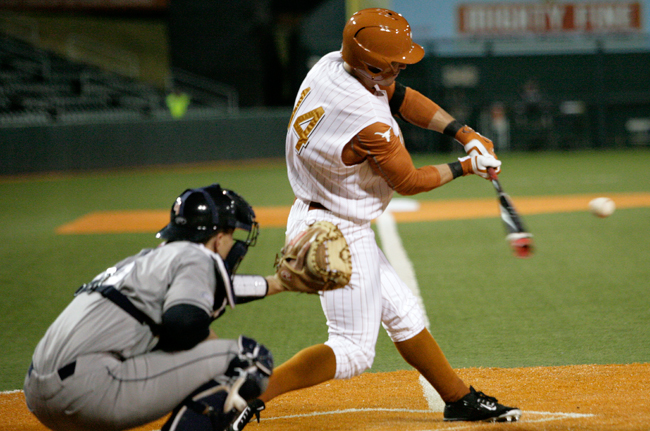 The team exploded for 11 runs in the last two innings in a 14–2 win over UTSA on Tuesday — the most runs the Longhorns have scored in a game since 2012.

Despite the Longhorns’ early success at the plate this season, including seven multi-run innings in five games, Garrido said he is still concerned that the offense is too reliant on hitting.

“What we need to do to get better is to broaden the dimension and scope of our offense from being base-to-base,” Garrido said.

Garrido said he is mainly concerned about the little things outside of just hitting the baseball such as getting bunts, drawing walks and finding other ways to get onto base. Throughout his 46 seasons of coaching at the college level, Garrido’s teams have been known for their “small ball” offense.

But so far this season, it’s been the “long ball,” primarily doubles, which have cleared the way for Texas. While they sit with a .287 batting average, the Longhorns have drawn only 22 walks while striking out 49 times and only converting five sacrifice bunts, including two failed attempts Tuesday.

While Texas drilled 12 doubles so far this season, Garrido said he knows hitting can dry up at a moment’s notice.

“Hitting is the hardest skill in all of sport, according to Sports Illustrated,” Garrido said. “So if that’s the only way you can win a game, when you go up against good enough pitching, you’re going to lose.”

The Texas offense has been led thus far by junior left fielder Ben Johnson and sophomore catcher/first baseman Tres Barrera, who share the team lead with eight RBIs and have hit at least one home run each. Freshman catcher Michael Cantu is just behind with a .400 batting average and five runs scored.

But at the bottom end of the stats are sophomore centerfielder Zane Gurwitz and freshman first baseman Travis Jones, who have struggled in the early going of the season.

Gurwitz is batting a rough .188 so far with four strikeouts, and Jones has yet to record a hit in his collegiate career while striking out six times.

“It’s typical a few of the players get off to a great start and then others will hit .100,” Garrido said. “And then all of the sudden, it switches, and it all starts to even out, and the team takes on an identity.”

Texas will get a good chance to work on building that offensive identity this weekend, going up against a Minnesota pitching staff that struggled against Houston last weekend to open the season.

The Golden Gophers gave up just over six runs per game in the three losses to the Cougars and allowed opposing hitters to post a .260 batting average. The Minnesota pitchers also struggled with their command, walking 17 batters and hitting four more.

While Garrido wants the team to get better at playing pitch-by-pitch at the plate, he said he’s thankful that they’re at least “hitting the ball better than ever.”

“We’re going to be thankful for what we got and work on what we don’t got,” Garrido said.