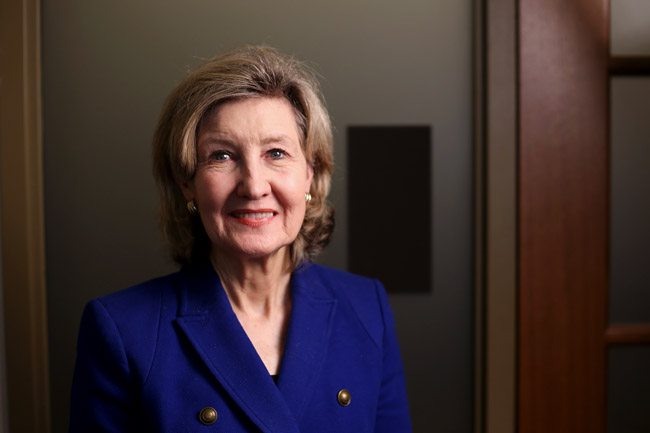 Former U.S. Sen. Kay Bailey Hutchison spoke at the AT&T Executive Education and Conference Center on Friday during the Kay Bailey Hutchison Center’s Symposium on North American energy security, an event designed to discuss geopolitical issues in North American energy. The symposium was part of UT Energy Week, a conference showcasing emerging research in the energy field. Hutchison discussed about the future of energy technologies and the effects of the energy reforms in Mexico. After the event, Hutchison sat down with The Daily Texan for a Q&A.

Daily Texan: Where did the idea for the Kay Bailey Hutchison Center come from, and what unique perspective does a multidisciplinary study of the industry with business, law and engineering have to offer, specifically?

Former senator Kay Bailey Hutchison: Honestly, John Beckworth, associate dean of the UT law school, thought of a joint business and law school energy center. I immediately loved it because I have been general counsel of a corporation, and I know so often that the business people do not understand the legal needs to make sure everything in the transaction is right. Conversely, sometimes the lawyers do not understand the needs of the business people to complete a transaction in a timely way so that they do not lose their deal or their customer. So, I thought this would be a perfect opportunity to have a joint center where law students in the energy field would learn about the business side and the business students would understand the legal side. [The Center] also has a particular focus on Latin America and the differences in the laws and legal systems. This could be very helpful for somebody who wants to explore or produce energy in another country. It was a perfect fit, and when they decided to name it after me, I was thrilled.

DT: How would you gauge the success of the KBH center in achieving the goals that you mentioned?

KBH: Well, we have only been created since last summer, but we have come such a long way in a very short time. I think this inaugural symposium has been a huge success. We have had Mel Martínez, the former senator and cabinet member, and Bob Jordan, the former ambassador from the United States to Saudi Arabia. They have given great insights on international energy. Mel is the chairman of J.P. Morgan Latin America, so he showed us the corporate side. Bob Jordan was insightful because Saudi Arabia is doing so much right now to affect the price of oil globally. He also had some good insights on the new king and the new hierarchy in Saudi Arabia. The symposium has been a wonderful success. The panels have been good, the questions have been good. The audience is really asking questions and that is what you want in a good conference.

DT: Has the KBH Center participated in the debate regarding the Keystone XL Pipeline?

KBH: I am a total supporter of the Keystone Pipeline, myself, but we have not taken a real position on that. It has been discussed in the symposium, and the [Obama] administration was represented here by an assistant secretary of state. The question has come up: Why would we not have a Keystone pipeline? Many in the room think that it would be an environmentally safer way to transport oil from Canada than the trucks that we are having to build new highways to accommodate. So that has been a real debate here and it has been very relevant.

DT: At a panel earlier this week, during UT’s Energy Week, experts agreed that for some issues, such as energy storage, regulatory agencies have fallen behind in developing regulation. Has the center tackled any of these issues and did you encounter any of these issues as a senator?

KBH: Absolutely. As a senator I encountered the new energy innovations. With solar energy, the biggest problem with using it was that it was so cyclical, and we could not store it. Even natural gas for cars. There has been so much that has emerged just in the last 10 years. I think the regulators are certainly trying to keep up with what is necessary in the regulatory field, but it is a work in progress.

DT: Could you talk about some specific ways that you helped regulatory agencies catch up?

KBH: Well, for sure, the Kay Bailey Hutchison Center will be able to shed light on what is coming up in regulation in terms of what might be needed, what might not be needed, what would be a better way to regulate. We want to allow for creativity to grow and progress. [We] do not want to stifle creativity by regulating something that is not there yet because it is not ready. There has to be balance to assure that the new kinds of energy, clean energy especially, are not regulated to death before they are able to be useful. For instance, the lack of battery storage for solar panels is a problem. If we allowed battery storage we would be able to run manufacturing plants consistently rather than have to lessen output in peak hours. Battery storage is an area where the federal government is doing more research and it’s very important to develop that. But, we want to make sure that as we do, there are environmental rules that assure that we are doing it safely and in an environmentally friendly way. We want the creativity to emerge so we can start using solar energy more efficiently. The new technologies would apply in other areas as well.

DT: Obama has supported an all-of-the-above policy that supports natural gas as well as nuclear and other forms of energy. So, a lot of different forms of energy are being researched. What energy innovation are you most excited about?

KBH: I think it is essential to make sure that we are getting the oil and gas in an environmentally correct way so that we become energy independent. It is going to make us more competitive globally because our businesses will have lower-cost energy. This is an area where America has led. We creatively produce new ways to get oil and natural gas out of the ground and out of the water. So, I think oil and natural gas is probably the biggest area where we can move forward and truly towards energy independence. Solar power and wind power are also very promising. We do not have the mechanics yet to make it a big percentage of our energy use, but Texas is doing quite a bit in wind, as well as solar, and it is very efficient once it is up and going. If we could get the battery storage, it is going to be a real part of our overall energy independence. I am excited about that, and I am excited about Texas’ role in producing these new options.

There is also another option — using currents in the oceans and the Gulf of Mexico. [We] can use currents to generate energy for use on land. That is something that is being experimented in the Galveston-Houston Area. The University of Houston is doing work in that area, as well as others.

DT: Today’s symposium has an international focus of stabilizing North America’s energy. What are specific energy initiatives in Mexico by Mexicans, Americans or private actors that you look forward to see implemented?

KBH: The exciting part of energy in Mexico is that they are opening it up. It used to be just PEMEX, the national oil company, that was able to produce oil and gas in Mexico. But President Nieto has certainly made strides in saying, “We want to open it up, we want foreign investment and we want more out of the ground, as well as the Gulf of Mexico.” He is making it happen, and the [Mexican Legislature] is going along with it, and they are in the regulatory stage now. I think the American companies are going to want to be a part of this. They are going to want to work, in some cases, with PEMEX, and, in some cases, independently. [The companies] are going to bid on leases in the northern part of Mexico that would be the continuation of the Eagle Ford find in South Texas that we think continues on in North Mexico. But also, in the Gulf of Mexico, there is a lot of opportunity. American and European countries are bidding and winning in the Gulf of Mexico for drilling in the deep water, but it is very expensive so that may be down the road because the price of oil is so low right now. But, the big question mark out there is safety and the drug cartels. No foreign company is going to want to come in if they are not going to be able to be safe and also be able to do business in a transparent way because we have laws that require that. This large criminal element in the drug cartels is really hurting so much of the tourism in Mexico, most certainly, and in some ways, business as well.