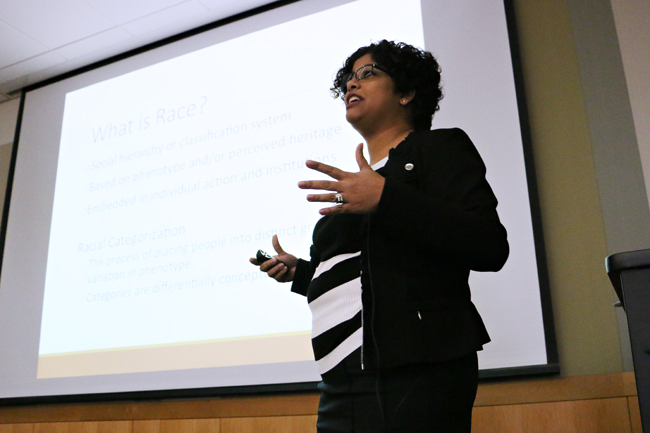 Student success in school is tied to how teachers perceive a student’s race, which can itself differ from how students racially identify themselves, according to Yasmiyn Irizarry, an African and African diaspora studies assistant professor.

Racialization, or how people perceive race, doesn’t happen without context, according to Irizarry. Because teachers perceive students as belonging to certain racial groups, teachers are more likely to subconsciously treat them differently. This phenomenon happens widely throughout education, but has specific and adverse effects on teacher-student relationships, which creates gaps in learning and growth over time, Irizarry said.

“There are not only consistent racial gaps in student achievement, but also in student learning, and they widen as students move through school,” Irizarry said. “It’s important that we understand not just why they’re coming to school less prepared, but also why once they’re entering school they’re not learning at the same rate.”

“I’m really thinking about this complex nature of race and racialization and the multiple dimensions that people draw from when they’re categorizing, defining and valuing that individual,” Irizarry said.

It’s difficult to define one’s own experiences when there is tension between how other people categorize you and how you identify yourself, public affairs graduate student Jaehee Choi said. She said, either consciously or subconsciously, many Americans, including teachers, ask themselves how to deal with “otherness” or minorities.

“Teachers are probably the first adults outside [students’] families that they develop a relationship with,” Choi said. “I think it’s really interesting that the interactions between the children and teachers that happen in the classroom might affect children’s self-identification later on.”

People need to think about race in broader terms, according to Rachel Bott, a German, Scandinavian and Dutch studies freshman.

“There’s a disparity between people who identify as a certain race and [how] they’re perceived a different way, so then they have a whole slew of negative experiences with the race that people perceive them as,” Bott said.