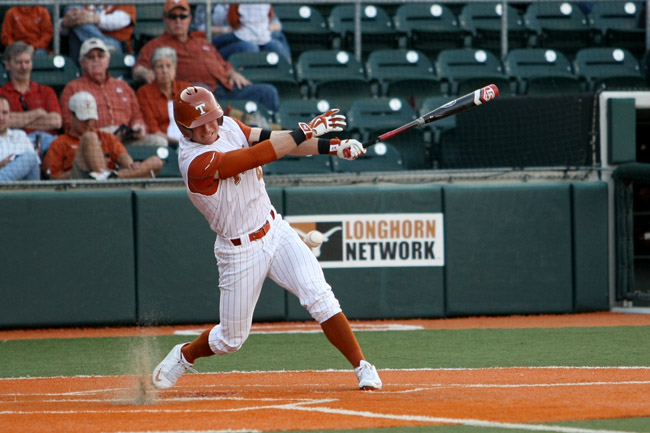 A bounce-back start from sophomore pitcher Kacy Clemens helped No. 8 Texas secure a four-game sweep against Minnesota in an 8–0 win Sunday.

Clemens came into Sunday’s game with a 24.00 ERA. In his first collegiate start, Clemens gave up eight runs on eight hits against Rice.

Clemens said he was frustrated after the disappointing start, but advice he received from head coach Augie Garrido and his dad, Texas legend Roger Clemens, helped him in the win against the Golden Gophers.

“I hadn’t really experienced that before,” Clemens said. “I was obviously pretty bummed about my first start. But this week, talking with [pitching coach] Skip [Johnson], talking with Augie and my dad, I just got everything back to speed. Came out today ready to go, and it went well.”

Senior second baseman Brooks Marlow said the Texas offensive explosion is no surprise to the team.

“We have a lot of guys that are going to do whatever it takes,” Marlow said. “They’re always going to have a quality at-bat. They have a plan when they go up to the plate. Somebody is always going to hit the ball every inning.”

The Longhorns added a final run in the fourth inning to extend their lead to 8-0.

“We want the pitchers to have good experiences,” Garrido said. “We don’t want to take them out late and have them give up two or three runs.”

With a solid outing from Clemens, the Longhorns were able to continue their domination against Minnesota. Texas won Friday’s game, 13–2. The Longhorns swept Saturday’s doubleheader with two 5–0 victories. Through the four-game series, Texas only allowed two runs while it scored 31 runs on 47 hits.

This weekend’s performance has shown Garrido promise in this year’s team.

“Positive things are contagious, and right now, things over the weekend went in a very positive way for the whole team,” Garrido said. “I think we took a giant step toward team work this weekend. All in all, a very good weekend for the Longhorns.”

The Longhorns (7–2) return to action against UT-Pan American (5–2) at 6 p.m. Tuesday at UFCU Disch-Falk Field.