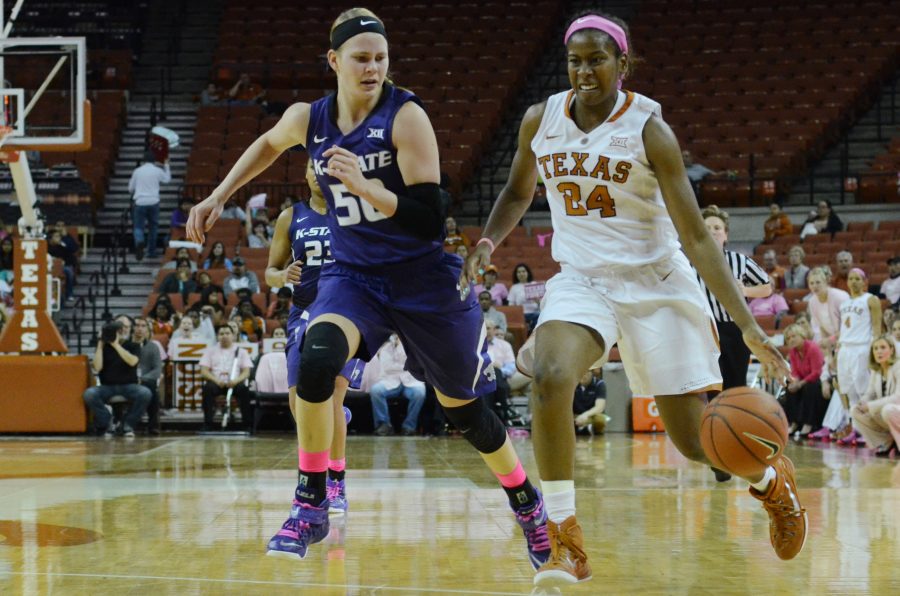 With three minutes remaining, it seemed the Longhorns had secured an easy path to their third straight victory.

Up by 10, Texas held control — until Texas Tech went on an 10–3 run to get within 3 points with less than 10 seconds left. A last second attempt from behind the arc helped Texas escape with its third consecutive victory, 62-59.

“We found a lot of ways to try to mess that one up,” Texas head coach Karen Aston said, laughing. “We made some young mistakes. The difference for me in the game was the lack of understanding. We’ll work on this in practice — I’m proud of the team, though.”

Texas (18–8, 7–8 Big 12) led Texas Tech for 35 minutes of the game and its bench outscored the Red Raiders’ by a margin of 22–5, but the team still suffered from a three-minute scoring drought toward the end of the game.

Texas Tech shot 44 percent in the second half compared to Texas’ 32 percent. But the Red Raiders, who kept No. 3 Baylor — which already clinched the regular-season Big 12 title — on its heels last week by shooting 11-of-20 from deep, missed all seven second-half 3-point attempts against Texas.

Freshmen guards Ariel Atkins and Brooke McCarty provided offensive sparks for the team in the second half, as 6 of McCarty’s team-leading 13 points came in the second half. She also hit key free throws late in the game to extend the lead to its final score.

Both centers — junior Imani McGee Stafford, who fouled out in the second half, and sophomore Kelsey Lang — struggled as they combined for just 12 points and three rebounds. But Texas received solid minutes from sophomore guard Brianna Taylor, who scored 7 points and grabbed nine rebounds.

Texas assistant coach Jalie Mitchell said the team is growing stronger as the players learn to take care of each other and grow more comfortable in different roles.

“It could be somebody one half or in one game, or somebody else in another half or game. It really doesn’t matter as long as we get it done,” Mitchell said.

With three games remaining, the Longhorns sit in a three-way tie for fourth. Texas will receive a first-round bye in the Big 12 tournament if it does not fall below sixth place in the conference standings.

Its quest for a top-six seed in the conference tournament and a 20-win season will be put to the test Wednesday as the Longhorns return home to face Oklahoma State. In the teams’ previous matchup earlier this month, Texas lost, 66–60, in Stillwater, Oklahoma.

The Pokes remain in third place with an 8–7 conference record, but a Texas victory would put the Longhorns in a tie for third in the Big 12.