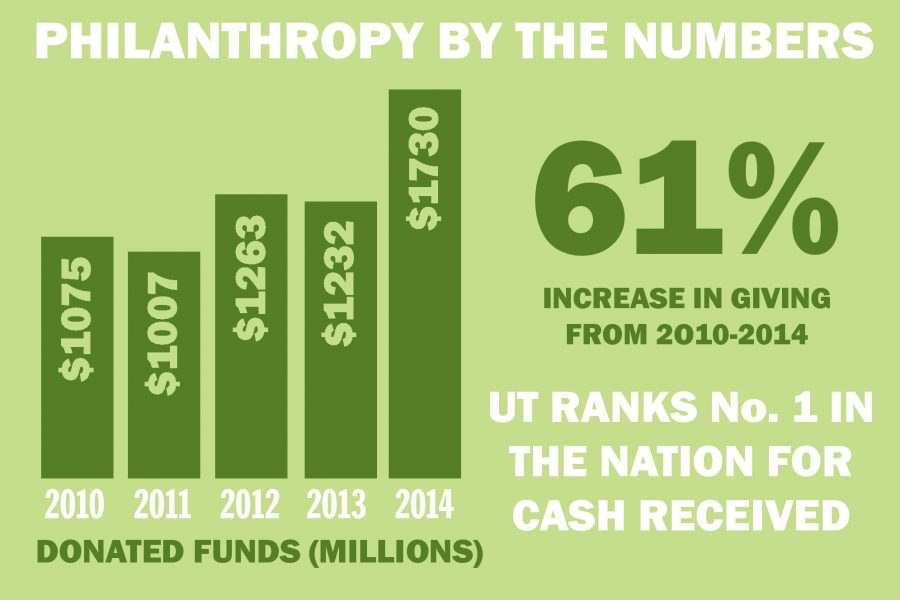 The UT System broke its philanthropy record this year, according to a report released at a Board of Regents meeting on Feb. 11.

Randa Safady, UT System vice chancellor for external relations, said the UT System broke a new record in 2014. She said philanthropic giving was up $500 million, or 40 percent, in overall giving, as compared to 2013.

UT-Austin broke a record as well, as it raised more money than any other public school in the country in fiscal year 2014.

“Most gratifying is the exceptional year of fundraising results at UT-Austin, ranking it first nationally among all public universities and seventh when you include private intuitions,” Safady said. “UT-Austin’s gifts in 2014 accounted for more than half of all cash to the UT System and more than half of its overall giving.”

Safady said the System has changed the way it reaches out to its potential donors because the alumni base that donates to the UT System skews increasingly toward a younger demographic.

“Conventional wisdom says, ‘Okay, let’s put them on our call list, let’s drop them a direct mail, let’s put them on a direct mail list [and] let’s drop them some mail,’” Safady said. “You can’t do that with young alums. It’s highly ineffective and very costly. They respond better to peer-to-peer activities, social media engagement and others. I can’t emphasize enough how important it is, especially for academic institutions, to unleash creative and entrepreneurial ways to reach young alums.”

According to the report, individual donors of all ages are giving in higher numbers than the UT System has seen in the past decade.

“Individual donors in a growing donor base are the heart of sustainable, balanced fundraising programs,” Safady said. “Both non-alum and alumni donor counts increased in fiscal year ’14, which reversed a downward trend. Fiscal year ’14 actually represents the highest number we’ve had in the last ten years.”

Safady noted that only 2 percent, or less than $19 million, of the money raised goes to a fund for universities to use at their own discretion.

“It’s easy sometimes, for people from the outside to look at the numbers and say, ‘You all have a lot of money. You should move it around to scholarships or pay down tuition charges or support any other worthwhile cause,’ but as you can see, restricted giving is much more desirable to donors because they want to see impact,” Safady said.

In a statement by the UT System, Chancellor William McRaven said donations are increasingly important for the function of UT System institutions.

“Charitable gifts are now representing a larger share of institutional expenditures across the System, so we are depending on philanthropy more than ever to carry out our universities’ respective missions,” McRaven said. “I’m delighted that our presidents are continuing to invest in philanthropic operations so that we can continue to grow our base of supporters and the dollars we receive.”