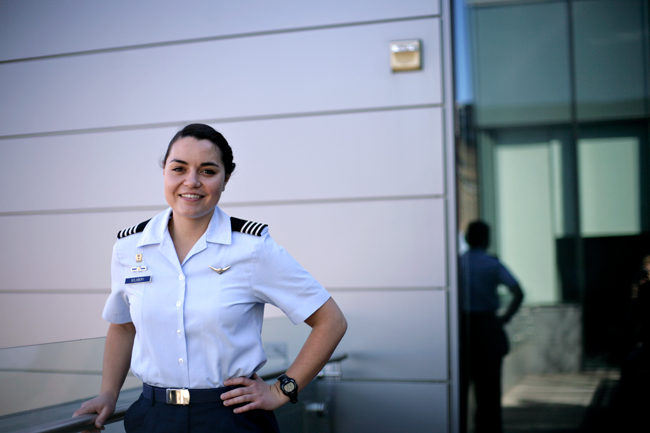 A 5-year-old girl stares up at a row of jets ascending toward the clouds. White exhaust fumes streak the sky as the Thunderbirds, the air demonstration squadrons of the U.S. Air Force, perform synchronized loops. In this moment, the young girl, Michelle Solsbery, decides her future. She wants to fly.

Now in her last year in Air Force ROTC, Solsbery is on her way to earning a seat in the cockpit.

“I’m worried about motion sickness,” Solsbery said. “But I’m really excited to get started and get into the real world.”

As commander, she delegates tasks, leads the group and prepares underclassmen for Field Training, a three-week long summer program that second-year cadets must complete to be commissioned into the U.S. Air Force after they graduate college.

Training is especially rigourous in the spring, as the commander and other upperclassmen have to prepare underclassmen for Field Training, according to Solsbery.

Although only 33 percent of the Air Force cadets at UT’s detachment are women, three out of the past four commanders have been female. Colonel David Haase, the ROTC department chair at UT, said this is no accident.

“They do very well,” Haase said. “I don’t know if it’s because they come in more mature or they have something to prove. The females are very strong. They’re committed and focused.”

Now in her second year in AFROTC, supply chain management sophomore Madison Glemser is training to earn a spot at Field Training this summer.

The Air Force only admits a certain number of cadets each year from across the nation. Acceptance is based on a faculty assessment, grade point average, fitness tests and SAT scores.

“[The national board] doesn’t care if they are male or female,” Haase said. “It’s a tough competitive process, and making it through is just amazing.”

According to Glemser, being a woman in this program comes with challenges. She said her biggest struggle is leading the flight. Each flight, or individual class within the detachment, alternates flight commanders throughout the semester.

“When you’re marching the flight around and calling out commands, guys tend to have a stronger voice because they are deeper,” Glemser said. “It’s hard for the girls to have a stronger command presence, but it’s definitely possible.”

Italian senior Hannah Prague was the Cadet Wing Commander in the fall semester. Like Solsbery, Prague plans to fly for the Air Force. Her decision to join ROTC grew from her family’s history in the military. She has relatives who fought at Pearl Harbor, stormed the beach at Normandy and fought in Vietnam.

“I wanted to go to college, but I still wanted to serve my country,” Prague said. “It was kind of a calling.”

Prague said the ROTC program is set up to hold both genders to the same standards.

“You’re a cadet first, and you’re a lady second,” Prague said. “It makes us stronger because it makes us be on the same level.”

Now in their last semester of college, both Solsbery and Prague have received their base assignments at Vance Air Force Base in Oklahoma and Columbus Air Force Base in Mississippi, respectively. After graduation, they will be commissioned. Then, within 364 days, they will enter active duty and begin pilot training.

“Whether you’re a woman or a man or whatever kind of income or ethnic background you come from, you can do this,” Prague said. “It’s a culture of competition here. You just have to fight like the rest of us.”