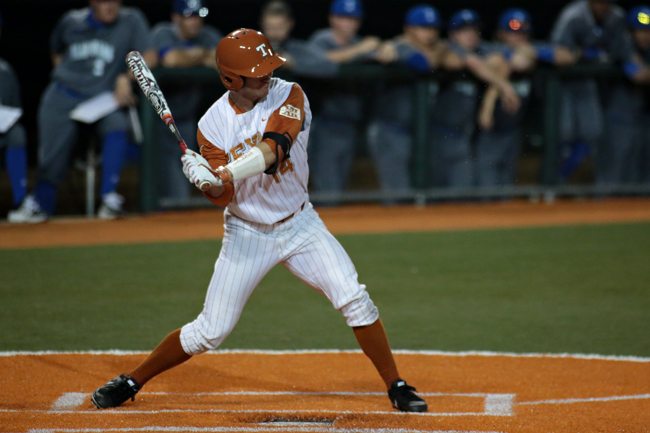 In No. 9 Texas’ first five games at UFCU Disch-Falk Field this season, the bats have come alive and driven in 45 runs.

“We did a good job of making contact and driving the ball,” head coach Augie Garrido said. “We had a lot of line drives, hit a lot of base hits with runners in scoring position and two outs. I think we played our game, and that’s what I was most proud of. Mentally, we were tough.”

Texas will now look to continue its offensive hot streak Tuesday night against UT-Pan American. The Broncos enter the game with a .224 team batting average, while Texas holds a .309 batting average.

Against Minnesota, Texas tallied 20 extra-base hits, of which Shaw had six. In the series finale against the Golden Gophers, the Longhorns had additional help at the plate from senior second baseman Brooks Marlow, who had the first four-RBI game of his career.

“All of that plays into the confidence,” Garrido said. “The hitters realize they don’t have to do it all themselves. It’s an unbelievable connection that has to go through everybody on offense, everybody on defense, and then how it applies to the team. It’s almost magical.”

While the offense is getting all of the attention early in the season, the Texas pitching staff is having a successful start on the mound.

Garrido said this year’s team ranks among the best Texas teams he’s coached. And while he thinks this team has good potential, he knows there is room for improvement.

“I think this team has a lot of building to do,” Marlow said. “I know we came out and scored a lot of runs and played well against Minnesota, but there’s a lot of things we still need to do and get better.”

First pitch for Texas (7–2 ) versus UT-Pan American (5-2) has been rescheduled to Wednesday because of inclement weather.