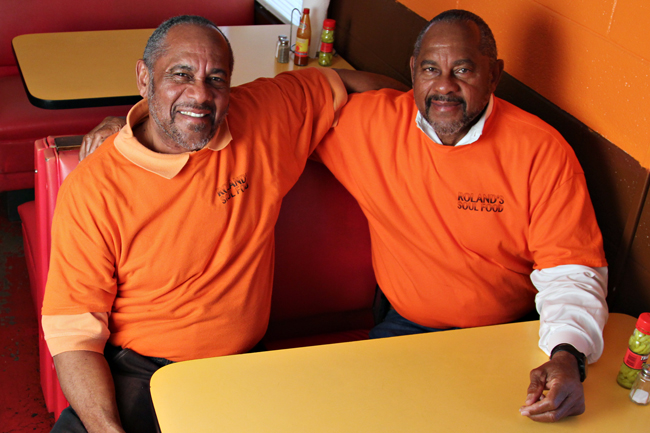 It’s easy to overlook a local establishment, such as Roland’s, because Austin is home to an array of celebrity chefs and has one of the most innovative food scenes in the country. Yet, Roland’s has remained a cornerstone for the disappearing, native East Austin community.

“Good Food For Good People.” That’s the motto Eddie Roland wrote in big, bold letters at the top the dry erase board that greets customers as they enter 1311 Chestnut Ave.

The brothers share the day-to-day responsibilities — Eddie manages the kitchen while Freddie mingles with the customers. They often visit with patrons and share conversations as prolific as the food that comes from the kitchen.

They’ve been doing it this way for upward of 40 years.

These two drew upon their time spent in rural Buda, Texas, and put together a menu and restaurant that reflects not just themselves, but an entire culture. Staples on the menu include pork chops, collard greens, black eyed peas and oxtails.

The decor is minimal. Although Freddie and Eddie said they lack musical talent of their own, they encourage customers to play the white baby grand piano sitting in the back of the restaurant.

There is no soda fountain and no commercial products. Instead, gallons of homemade sweet tea, cherry Kool-Aid and lemonade line the counter.

Chairs come studded with tennis balls on the legs to provide optimal comfort and minimal marking. Form follows function at Roland’s, but what these two lack in interior designing, they make up for in their cooking.

Come here for home-style cooking but don’t expect an organic or vegan menu. Roland’s is likely to be serving favorite southern family style recipes, but better: pork chops that have been conservatively battered, fried and then smothered with their own gravy for $10.99. For the same price you can opt for equally savory beef tips have been slowly braised for hours atop a bed of rice.

But the jewel of the menu is the stewed oxtails that are messy, fatty and simply delicious.

Side choices include tender collard greens, yams that have been reduced to bring out their sweetness or black-eyed peas that have been stewed with a healthy portion of bacon.

The collard greens, although tender and flavorful, were admittedly, overly-seasoned with too much salt. Ask for some butter or honey for the piece of cornbread — crispy on the outside and moist in the middle — that accompanies most plates.

Roland’s accomplishes what so many white-tablecloth restaurants aspire to produce: A product that resonates throughout the community. But, unfortunately for so many, exposure to southern soul food is, paradoxically, more foreign to Austinites than sushi.

But as long as Austin has “Good People,” expect Roland’s to provide “Good Food.”