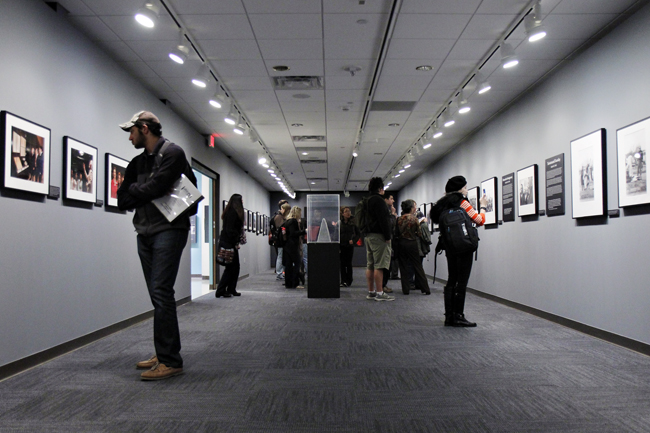 An exhibit honoring the 50th anniversary of the Selma-to-Montgomery marches, one of America’s most pivotal civil rights events, is now on display at the Lyndon B. Johnson Presidential Library.

The first half of the exhibit, “March to Freedom,” features photos, documents and videos from the Selma-to-Montgomery marches that occurred from March 7–25, 1965. The marches, which civil rights leaders such as Martin Luther King Jr. and John Lewis led, were vital to the national support of the Voting Rights Act of 1965 that ultimately led to its passage.

Don Carleton — the executive director of the Briscoe Center for American History, which houses many of the photos that were selected for the exhibit — said it was symbolic to show photos from both the 1965 marches and the Civil Rights Summit.

“There’s beautiful symmetry in having a photo [at the exhibit] of John Lewis, who was beaten in those marches, hugging President Obama 50 years later,” Carleton said. “[The University] has been in the business of promoting African-American history and documenting it for a long time.”

The exhibit has a powerful message that should reach American generations both past and present, according to Ben Wright, public affairs officer for the Briscoe Center.

“The photos, images and documents are a reminder to us all about the triumphs and tragedy of the 1960s and of the civil rights movement,” said Wright. “There was horrendous brutality and intimidation, and, yet, there is also encouragement, hope and progress. We see those together in the exhibit.”

“I feel like, [at UT], I am very unrepresented since African-Americans are less than 5 percent of the total University population,” Diack said. “To have a bit of our history displayed and represented is very important.”

Diack said she believes UT could do more to represent African-Americans.

“I want the University to do more things like this because one of the reasons more African-Americans don’t come here is because they feel like it’s an underrepresented community,” Diack said.

The exhibit will be on display until April 12.