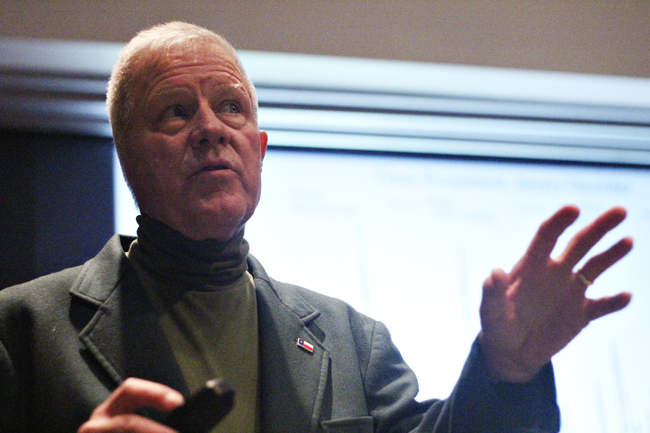 Drought conditions aside, Texas faces a potential water crisis because of the increase in urban populations, according to a lecture the Humanities Institute presented Tuesday.

As Texas looks at the problem of water going forward, Andrew Sansom, director of the Meadows Center for Water and the Environment at Texas State University, said the state has to address the fact that its population will double in the next 50 years.

Sansom said this raises questions of where the increased population will get water.

“[Texas] has already given permission for more water to be withdrawn from most of our rivers than are in it today,” Sansom said.

Although Sansom painted a dim picture of the future of Texas’ water supply, he cited El Paso as an example of innovative water collection.

“In El Paso, they are putting immense amounts of energy into desalinating brackish water, which is closer to the customers and cheaper to desalinate than gulf water,” Sansom said.

Katherine Lieberknecht, community and regional planning lecturer for the UT School of Architecture, cited a chart from the 2012 State Water Plan predicting the amount of urban water use will surpass the agricultural use of water in 2060. Lieberknecht said this statistic helped her better understand the relationship between supply and quality of water in cities.

Lieberknect said, despite water-saving methods Austin currently employs, such as recycling wastewater and collecting rainwater for irrigation, the City needs to work on limiting its water consumption.

“The U.N. estimates that humans should have 13 gallons a day,” Lieberknecht said. “The average use of water around the world is 40 gallons per day. Austin’s conservation goal is to get us down to 140 gallons per day.”

Efforts to conserve water at the University included reducing the use of fountains, changing the sprinkler systems from manual to digital and continuing to look at other methods of landscaping.

Jim Walker, director of the office of sustainability, discussed how the University plans to limit its water consumption.

“One [way] is our natural resource conservation plan that lays out 40 percent water reduction of total use from our high in 2009 and, by 2020,  reduce[s] of half from non-potable sources,” Walker said.