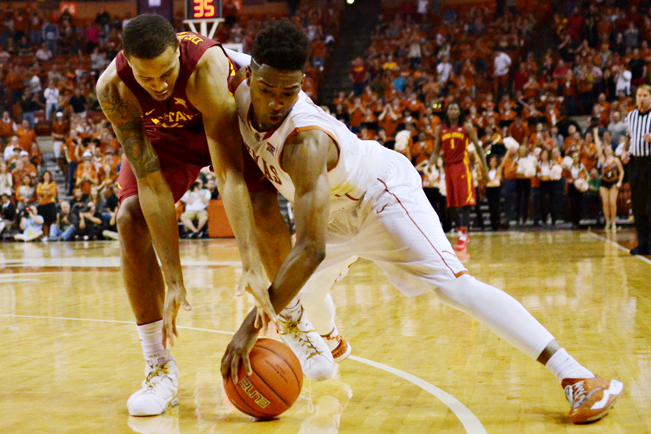 Texas’ tailspin continued Tuesday night after No. 20 West Virginia held on to its early big lead for a 71–64 victory. It’s the third loss in a row for a slumping Texas team — now 6–9 record in Big 12 play — that is confirming its status as a bubble team for the NCAA tournament.

West Virginia (22–6, 10–5 Big 12) overwhelmed Texas’ ball handlers with a relentless full-court press that set the tone early. Using an 11-man-deep bench, the Mountaineers were able to keep the pressure on Texas’ thin corps of ball handlers and force them into 17 turnovers.

The constant pressure got the Mountaineers off to a blistering start, as it looked as if they were going to run the Longhorns out of Morgantown. They opened an 18-point first-half lead, converting turnovers into easy points and forcing their way into the paint against the Texas zone.

But Texas wasn’t going to give in that easily.

Sparked by sophomore guard Kendal Yancy’s corner three, Texas began the uphill battle. The Longhorns scored in four-straight possessions, cut the deficit to 10 and were right back in it. They took advantage of their low 15-shot first-half total, making 73 percent from the field.

But then frustration boiled over for struggling senior forward Jonathan Holmes. In the waning seconds of the first half, West Virginia forward Devin Williams set an illegal screen that went uncalled as he checked Holmes in the back. Holmes retaliated, swinging his elbow and catching Williams in the face. Holmes was given a flagrant two and ejected from the game as Texas entered halftime trailing by 11.

The start of the second half was a complete reverse of the first as Texas cut the double-digit halftime lead to two in a hurry. They began to beat the press and find easy buckets, forcing West Virginia into a 1-3-1 zone defense.

But that’s as close as Texas would get. West Virginia opened it back up quickly, going on a 13–2 run of their own. On multiple occasions, Texas cut into the lead, putting pressure on West Virginia, but, ultimately, the hill proved too steep to climb.

Coming off a 29-point performance, Yancy was a quiet 4-for-8 with 9 points.

The Longhorns’ path doesn’t get any easier either, as they go to the Phog for a road game against No. 8 Kansas on Saturday.