Yancy that! Sophomore guard Kendal Yancy is taking advantage of his opportunities 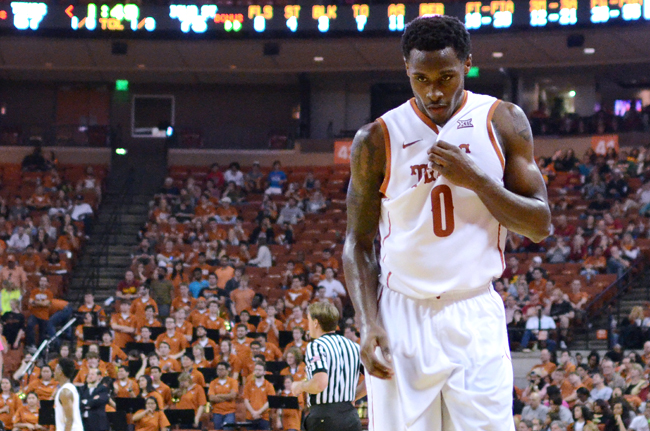 When sophomore guard Martez Walker left the University following multiple arrests in the fall, it was unclear how his minutes would be distributed among the backcourt.

Walker scored double figures in four of the last five contests of his freshman campaign, overcoming early-season struggles and demonstrating his potential value to the 2014–2015 squad.

With his departure, there was a gaping hole in the Texas backcourt alongside sophomore guard Isaiah Taylor. Junior guard Demarcus Holland likely would have started but, while he is an elite defensive player, he does not have a scorer’s mentality. Junior guard Javan Felix, on the other hand, can score in bunches but struggles on the defensive end.

By default, Texas’ best hope for a complete guard rested in the maturation and development of sophomore Kendal Yancy. But could the guard who averaged only 3.4 points per game as a freshman take the necessary leap in production?

Early in the season the prognosis looked negative.

When the 2K Classic concluded, he was only averaging 4.25 points per game while making less than 38 percent of his shots from the field.

However, because of injuries to both Taylor and Felix, Yancy was inserted into Texas’ starting lineup when it returned to Austin to face Saint Francis. His response was 12 points and six rebounds, tying his then career-highs in both.

In the win, Yancy attempted 10 shots. He wouldn’t match  that number again until setting a new career-high in points with 14 in a 74–71 overtime loss to Stanford. The performance was one of the most efficient efforts of his career. He finished with an effective field goal percentage of 65 percent and a true shooting percentage of 67 percent.

Despite these efforts, the sophomore played less than eight minutes per game against Texas’ first eight conference opponents, scoring 1 point per contest.

Following concussions to
Felix in a loss at Baylor and to senior forward Jonathan Holmes in a loss to Oklahoma State, Yancy once again was thrust into the starting lineup and, this time, was determined to stay.

In wins over Kansas State, TCU and Texas Tech the sophomore did not produce very eye-popping numbers, but he appeared to be a positive presence on the floor. However, in losses to Oklahoma, Iowa State and West Virginia, Yancy asserted himself on the offensive end and did all he could to help out a team that struggled to hit baskets.

He scored a career-high 29 points against Iowa State— the most a Longhorn has scored in a game since Myck Kabongo dropped 31 points in Texas’ 22-point come-from-behind victory over Oklahoma in 2013. Perhaps even more impressively, Yancy sunk six threes in the loss — the same amount he hit during his entire freshman campaign.

Yancy appears to be gaining confidence each and every game, and he is finally settling in as a threat when shooting the basketball. While his elevated play may not be quite enough to salvage the season, he could be setting himself up for a very productive junior season.