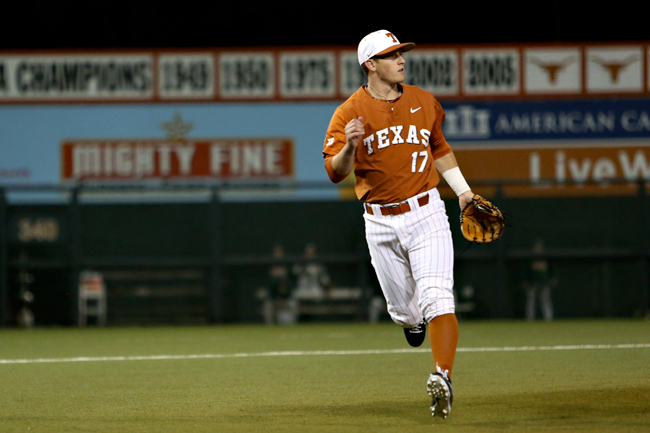 After a strong start to the season, the Longhorns offense fell silent for the first half of Wednesday night’s 5–4 win against UT-Pan American.

Down 4–0 after four innings, the Longhorns began their comeback. With runners on first and second and two outs in the fifth, junior shortstop C.J Hinojosa drilled a single back up the middle to get the Longhorns on the board.

Two innings later, senior right fielder Collin Shaw recorded Texas’ first extra base hit of the night — an RBI double to cut the deficit to 4–2. In the next inning, Texas senior second baseman Brooks Marlow led off the inning with a walk and scored on freshman third baseman Bret Boswell’s double. Two batters later, Boswell came home to tie the score on a single by sophomore center fielder Zane Gurwitz.

Brones starting junior pitcher junior Parker Gallegos held Texas (8–2) without an extra base hit for just over six innings. His defense played a big role in that, including sophomore first baseman Victor Garcia Jr., who made a diving stop in the sixth inning to rob Marlow of a hit.

Trailing 4–1 in the seventh, No. 6 Texas scored on a double by Shaw. The Longhorns then tied the game in the eighth with an RBI double by Boswell and an RBI single by Gurwitz.

With runners on the corners and two outs in the bottom of the ninth, Boswell singled up the middle to bring in Shaw and give Texas a 5–4 win.

“I thought I was going to get a hit, and I was just looking to hit it up the middle and get a good swing on it,” Boswell said.

Texas’ early difficulties at the plate didn’t come from failing to get the bat on the ball — the Longhorns were sent down on strikes only twice in the game. The issue was getting the hits past the defenders.

After escaping a jam in the top of the ninth when UTPA had runners at first and third with two outs, the Longhorns found themselves in the exact same position. However, with a full count, Boswell just sneaked the ball past the shortstop to win the game.

Freshman starting pitcher Connor Mayes struggled in his second collegiate start. After posting a perfect first inning, Mayes allowed two runs in the second inning, including one that came after he dropped the ball while covering first base. He then allowed another run off a blooper single before being pulled from the game.

Two of those runs for UTPA (5-3) came on errors by the defense, which had its struggles during the night as well. Freshman catcher Michael Cantu allowed his first passed ball of his career and Hinojosa bobbled a ground ball — both of which led to runs.

Texas returns to action Friday night at 7:30 p.m. to start off a three-game series against San Diego at home this weekend.