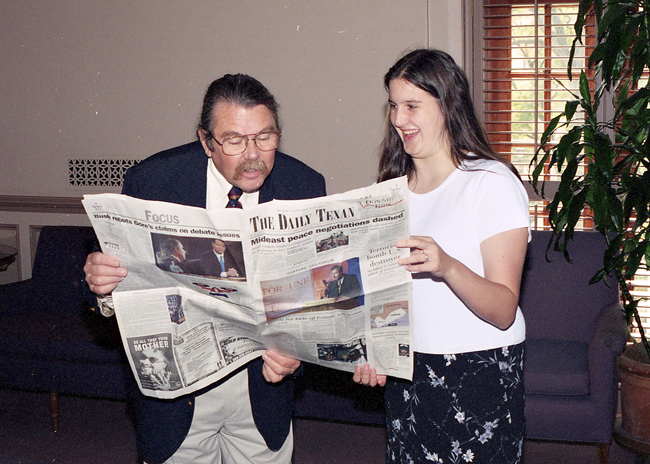 Richard Allen Finnell, journalist and long-time print adviser for The Daily Texan, died Saturday at the age of 70.

Finnell, a UT alumnus, was a mainstay of support for Texan staffers over the course of his 17-year tenure as adviser, according to former managing editor Jennie Kennedy.

“When I told Richard I wanted to be managing editor, I was dumb, and 20, and had all these beautiful ideas — and he supported me in every direction I wanted to go,” Kennedy said. “The thing I loved about Richard is that no matter what we wanted to do, he had our backs.”

Finnell worked long hours, reading each article before publication until his retirement in 2009. Erin Inks, who served as managing editor in 2004, said the staff appreciated his dedication — especially when technical delays meant the workday extended long past deadline.

“When I was managing editor, we had some difficulty implementing new software, so we were having tons of technical issues,” Inks said. “He was always the only adult there, sitting with us [and] finishing the paper. We were there so late, and he didn’t have to do it, but he stayed there with us. He was there to help.”

Finnell had an extensive background in journalism. Before working at the Texan, he served as the editor and manager of Hill Country News from 1983–1993 and as the managing editor of Taylor Daily Press for four years. Despite his experience, he let Texan staffers make their own mistakes, Inks said.

“For someone who had as much experience and knowledge as he did, I’m sure at times it was hard to pull back and let us be a truly student-led newspaper,” Inks said. “But that’s what he did. He was there for us to give advice, to circle something in red [and] to tell us what was really bad — but he was never overbearing.”

Finnell was known for his honesty, Kennedy said.

Kennedy, who was managing editor for three semesters, said she couldn’t imagine a better adviser.

“There was nobody better in the world to support a bunch of college kids trying to write a paper,” Kennedy said. “At the end of the day, he taught us to use our good judgement. He taught us that no one was the boss of us.”

And Finnell, known for stroking his carefully cultivated mustache — and occasionally leaving the office basement to help his son run a fireworks stand — was funny, too.

“There’s just something about having an adviser that will look at your stuff at midnight and still crack up about it,” Kennedy said. “I advise everyone to get one of those.”

Finnell is survived by his sister, Carmen Shinn, and his son, Cory Finnell.