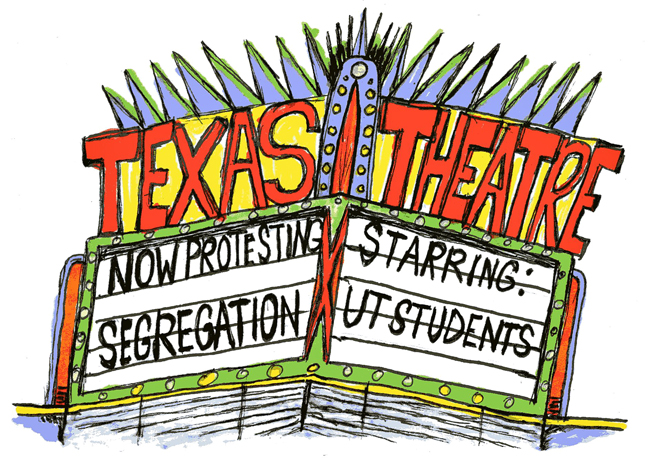 Fifty-four years ago, the CVS on the Drag was the Texas Theatre, a popular place for students to go, as long as they were white. With its doors closed to African-American students, the theater became the site of a series of peaceful protests in an effort to integrate.

In December 1960, more than 100 UT students lined up outside the Texas Theatre to purchase tickets. According to an article published in the The Daily Texan, the students began their first of many peaceful protests by repeating the same mantra as each approached the ticket booth.

“I would like to buy a ticket if everybody is being admitted,” the students said.

Ticket sellers denied the request repeatedly, and the group of African-American and white students would return to the end of the line only to try again.

In response to the policy they deemed unfair, a group of people came together to protest in December 1960. Despite inclement weather and the Texas Theatre manager’s efforts to keep them at bay, the students were persistent in their efforts to make a change.

The “stand-ins,” which continued through May 1961, lasted anywhere from one to four hours. In response to the demonstrations, theater manager Leonard Masters moved the ticket selling operation indoors.

“I’m not going to have arguments going on in my theater,” Masters said. “We (Trans-Texas Theaters) have a policy and I have to enforce it. My feelings have nothing to do with it.”

In light of the stand-ins, UT student Gwen Jordan spoke to the Texan about student life as an African-American.

“I came to UT very naive, looking for more oneness,” Jordan said. “I would rather say ‘no thanks’ [when white friends invite her to the theater], than explain over again to them why I can’t go. They just forget sometimes.”

Students such as Jordan fought to integrate the theater and other establishments on the Drag, but they found the disapproval of more than just business owners. Upset by these efforts, student Egan Tausch shared his thoughts on integration.

“Segregation is the right way to end this whole mess,” Tausch said. “Proprietors have the right to refuse admittance to whomever they want to. I believe that segregationists are now the
minority group.”

In spite of the opposition, students continued their demonstrations, eventually receiving support from former first lady Eleanor Roosevelt. As UT students returned from winter break, they opened up their copies of the Texan to see Roosevelt’s approval of the protests.

“I admire so much the stand which the students at The University of Texas have taken,” Roosevelt said. “I am personally grateful to the Texas students for making the effort to bring about the end of this kind of segregation.”

With Roosevelt’s support, the protests continued until Masters, the theater manager, agreed to a one-month trial period during which African-American students were admitted into the theater. At the end of the trial period, the theater threw out its old policy and opened its doors to all students.