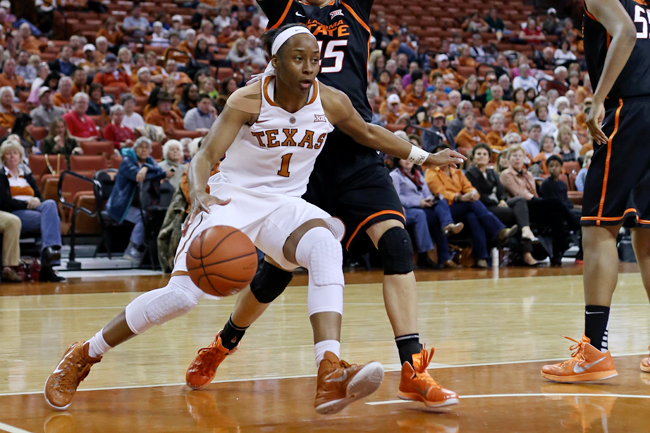 With the help of its bench, Texas found its fourth consecutive victory Wednesday night.

The Longhorns tallied a total of 22 points from its bench players and recorded a 39 percent shooting percentage in its 59-42 win over Oklahoma State.

“The last two games, our bench production has been really the difference in the games,” head coach Karen Aston said. “So them coming in and us not losing anything, and in fact gaining with them coming off the bench, has probably been a positive thing for us.”

Junior guard Empress Davenport, who received a standing ovation coming out of the game, led the Longhorns with 15 points, tying her career-high mark.  While she started earlier in the year during non-conference play, Davenport learned a lot from her time on the sideline.

Despite Texas’ lack of boxing out and rebounding, the Cowgirls still had trouble on offense. Oklahoma State grabbed 14 offensive boards accounting for 11 second chance points. The Cowgirls out-rebounded the Longhorns 43-39, becoming just the second Texas opponent all season to accomplish that feat.

“[Junior center Imani McGee-Stafford] and [sophomore center] Kelsey [Lang] picked it up a lot in the second half,” Aston said. “I thought all the big guards did a good job of neutralizing Donohoe, who I think has been playing really well for them.”

Wednesday’s victory positions Texas (19–8, 8–8 Big 12) in a tie with Oklahoma State for third place in the Big 12. The Longhorns are now in position to have a first-round bye in the conference tournament.

Aston said the team will shift its focus to its upcoming game against West Virginia on Sunday. When the team returns for senior night Tuesday, seniors Nneka Enemkpali and Krystle Henderson will be back on the court to formally end their careers.

“It should mean something to our fans to show up for [Enemkpali] because it is her final walk on the Erwin Center floor,” Aston said. “[Henderson] has accepted a role and been a big part of our program. These games mean something. We’re not just playing to be playing. I would like for everyone to understand that the crowd makes a big difference for us, and we need the win.”