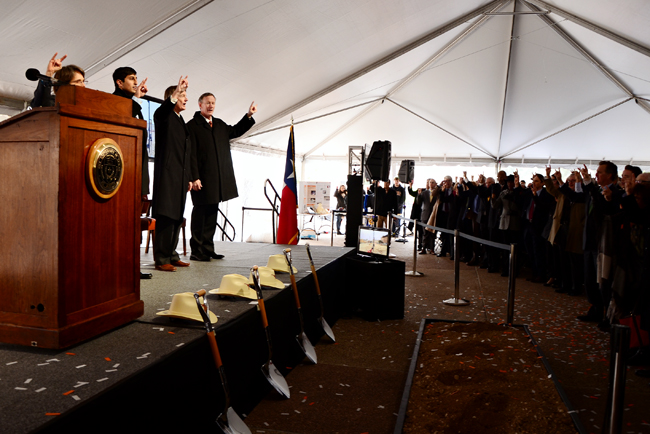 The Cockrell School of Engineering celebrated the groundbreaking of its new Engineering Education and Research Center on Thursday.

The 430,000 square-foot center, which will cost approximately $310 million to construct, will be one of the largest structures ever constructed on campus and will include two connected eight-story towers. The groundbreaking ceremony for the center took place on its construction site, which is directly adjacent to the Cockrell School.

The center is one of the most important facilities the University has constructed in decades, according to President William Powers Jr., who spoke at the ceremony.

“As we know, engineering is critical to the advancement of the state,” Powers said. “We need more engineers, and we need research in engineering, and this building will do both of those. Our facilities needed to reflect the 21st century.”

Having a world-class engineering school is crucial for a flagship university such as UT, according to UT System Chancellor William McRaven, who also spoke at the ceremony.

“We all know the field of engineering is inextricably linked to the economic success of Texas, and the Cockrell School is the epicenter of engineering education,” McRaven said. “Maintaining the status quo is not good enough for this school.”

Detailed planning for the center began three years ago. Powers said despite initial challenges in fundraising, the project is currently under-budget, and the University has raised $65 million for the center.

Powers said the center will have modern project rooms with open glass windows and feature hubs for engineering students to create and share ideas.

It will replace a 50-year-old Engineering-Science Building that was overdue for change, Cockrell School dean Sharon L. Wood said.

“Our facilities had not kept up with the technology,” Wood said. “It’s very hard to attract excellent students and faculty, telling them that you’re doing cutting edge research, if your facilities can’t support it, so that’s why we’re so excited about it. It’s going to really showcase engineering.”

Wood said the center will allow the Cockrell School to increase enrollment by 1,000 students, from its current enrollment of roughly 7,700 students.

“It was ironic in the sense that there was world-class research going on there, yet it was more than 40 years out-of-date,” Kudva said.