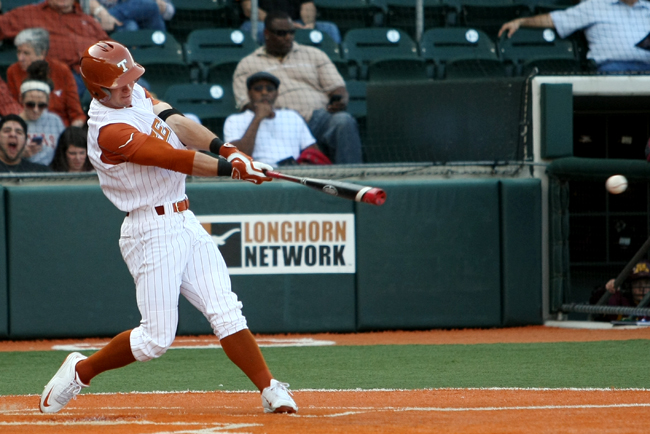 Senior right fielder Collin Shaw has a knack for the spectacular.

In the bottom of the sixth inning against UT last week, the Roadrunners threatened to score with two men on base when UTSA’s junior infielder Geonte Jackson sliced a ball into foul territory. Shaw raced down from his spot in right field. While trying to avoid his fellow teammates in foul territory, he looked down — and when he looked back up, he overran the ball. In a last-second effort, Shaw stretched his glove behind his right shoulder. He made the inning-ending catch while falling backwards.

This impressive catch appeared on ESPN’s “SportsCenter” Top 10 plays. However, it’s not the first time the 6-foot, 199 pound right fielder has made it on the program; he’s been there a couple times before.

“I think my favorite catch I’ve made since I’ve been here was at OU last year,” Shaw said. “It was a big game. A big point in the season. But Tuesday was cool. They’re all fun. Any time we get an out is good.”

Last season at Oklahoma, Shaw made a diving catch where he had to dive straight back into right field, which was arguably more difficult than the one made against the Roadrunners, according to head coach Augie Garrido.

“I think it was even more difficult than [the one against UTSA],” Garrido said. “The ball was completely over his head, which makes it very difficult. He had to leave his feet and literally dive, not in a downward way. It was straight back, and he caught it.”

In his fourth year with the Longhorns, Shaw’s catching ability in right field is something the team can count on. In fact, it’s the reason Garrido has Shaw in right.

Garrido said right field is the most difficult position to play at UFCU Disch-Falk Field. When games begin at dusk, the sun’s shadow off of the stadium makes playing right a challenge. The size of the stadium makes it difficult to play in with the right field wall — 325 feet from home plate and 400 feet to center field. But Shaw hasn’t had much trouble playing right.

“He’s way above average in his skill sets,” Garrido said. “He’s fearless. He was a wide receiver in high school — a very good one — in football. Those skills, you’re seeing that right here. A lot of it is he’s just absolutely fearless.
He’s tough.”

Alongside his fielding abilities, Shaw has had success at the plate. In high school, Shaw earned all-state second team honors during his season while batting .487 with seven home runs.

Boasting both fielding and batting ability, Shaw has become a team leader.

“He does everything right in the program,” Garrido said. “If he hits a ground ball, he tries to beat it out — no matter if it’s a sure out in most people’s minds. That’s what we ask him to do — run to be safe from home to first. He does things right. And that always provides leadership.”