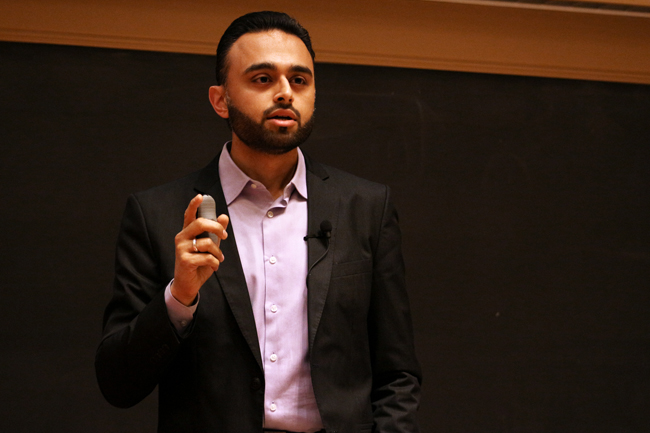 To better understand the threat ISIS poses, a UT professor and guest lecturer explained how they believe United States action during the Persian Gulf War contributed to the formation and spread of the terrorist group.

ISIS, also known as the Islamic State, is an extremist terrorist group that controls territory in Iraq and Syria and has a presence in other areas of the Middle East. The group adheres to a medieval ideology, and the beheadings it regularly carries out often go viral on social media after promotion on ISIS-operated Twitter accounts.

Journalism professor Robert Jensen opened the discussion with a reading from the Bible verses in Matthew 7:1–5, which are about having a plank in one’s eye. Jensen said this concept is important to recognize hypocrisy inherent in United States military involvement in Iraq. Jensen referred to what he calls the crucial point in the Persian Gulf War history in 1990 and 1991.

“In 1990, [the history] got very clear,” Jensen said. “The regime of Sadam Hussein invaded Kuwait. The United States secured a resolution to authorize the use of force. In 1991, the U.S. drove out the Iraq force, but there are questions about whether coalition forces engaged in war crimes when firing on retreating Iraqi troops.”

Jensen said there are clear records of U.S. military leveling much of the infrastructure within Iraq.

According to Jensen, the U.S. military used force against the civilian population, which technically constitutes as a war crime.

“If a civilian’s infrastructure is decimated, that means the population is suffering, and you can exert more power,” Jensen said.

Jensen said further issues were fueled by the Middle East’s oil, which greatly complicated the politics of the situation.

Harris Zafar, a guest lecturer and author of “Demystifying Islam,” said the group’s actions do not show the true values of Islam.

“Some will make this a religious matter that those joining ISIS are deeply religious,” Zafar said. “Can a group whose primary tool is chaos, destruction, disorder, mayhem be inherent of Islam?”

Sarah Khan, a religious studies and government sophomore, said she appreciated the discussion because of her own background.

“My dad is Muslim … he wants to lay low and not run into trouble,” Khan said. “My main thing [is looking for] a solution for Islamophobia … Through moving forward in this problem, there are solutions, but we have to be willing to come together.”