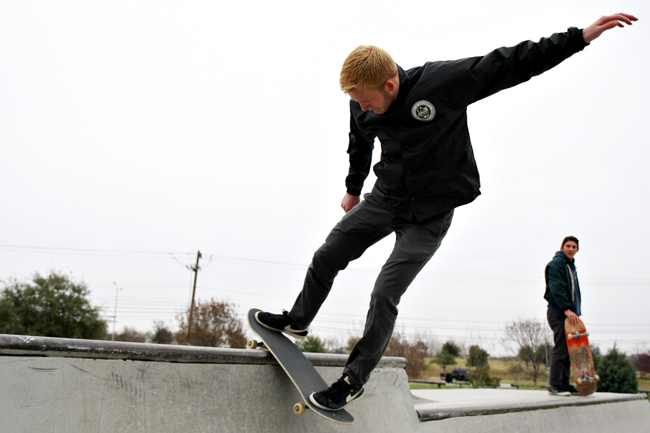 When economics junior Trung Nguyen skateboards from West Campus to the music building every Monday, he weaves around hundreds of students on their way to class — but his mind is elsewhere. He pictures New York. He’s skating through alleys and maneuvering between taxis and bikers. He’s flying past graffiti-covered walls and shredding down curbs and rails.

“The flow of the city is a big influence in skateboarding and its lifestyle,” Trung said. “It’s very spontaneous. You’re interacting with your environment.”

Trung found other UT students who share a love for city skating a year ago when he joined Texas Skateboarding, a student organization that allows skateboarders to meet up and skate around Austin. Finance senior Cooper Morrison started the club after moving to Austin his freshman year.

“You meet people in the city you grow up in who skate, but when you come to college, you don’t know that many people [who do],” Morrison said. “I wanted to meet more people who skate here.”

Since its founding in 2013, the club has grown to include over 40 students. The organization maintains a laid-back structure without formal meetings, Morrison said. When a member wants to skate, they post in the Texas Skateboarding Facebook group to invite others to join.

The group skates at House Park, a skate park in Austin, and different ramps around town. But for Trung, the most enjoyable outings just involve skating on obstacles in the city. Trung said anything from curbs and rails to banks, and even cars, are fair game.

“We’ll see an obstacle that we want to skate, and you can get creative with it,” Trung said. “Skating at a skate park isn’t really that hard, but if you skate something on the street, that’s more creative.”

Capturing these moments of creativity on video is an integral part of Texas Skateboarding. Biology senior Andy Nguyen maintains a YouTube channel called “income taxes,” where he posts clips of group members and other skaters doing tricks. Andy, who is also a photographer for The Daily Texan, recently released his second full-length video, called “Nostalgia,” which has over 1,000 views.

Trung said filming a trick gives skaters an outlet for expressing themselves.

“We like to think about it as graffiti,” Trung said. “You see a wall and say, ‘I’m going to go skate on it,’ and we film it, and that’s like leaving your mark.”

Morrison said the people who skateboard are quite diverse in other their hobbies and interests, even though there tends to be a “slacker” stereotype tacked on to the skateboarding culture.

“I think it used to have more of an association with troublemakers,” Morrison said. “But I’ve met people you wouldn’t expect to meet through skateboarding. One of my good friends who skateboards graduated with a 4.0 as a physics major and now goes to Columbia on scholarship.”

All three members acknowledged that skateboarding comes with its fair share of injuries. Injuries range from broken bones and rolled ankles to head injuries. Morrison said he’s suffered several concussions from skateboarding, but he keeps getting back on the board.

“There’s something about it that’s just really exciting,” Morrison said. “I think the best part is the feeling of trying something a bunch of times and getting hurt a lot but finally getting it. The rush you get is really fun.”